POLITICS AND PLAY | The Rashtriya Swayamsevak Sangh as it really is 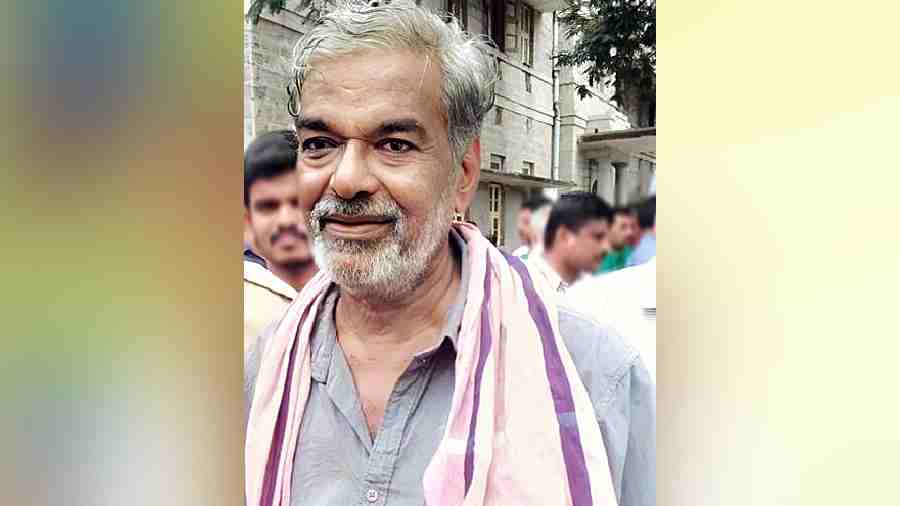 In the Kannada literary world, Devanura Mahadeva first made his name through short stories and a novella,  Kusumabale, of striking originality and power. He has since won respect for his political integrity and his moral courage, for his refusal to succumb to the seductions of State patronage, and for his identification with the disadvantaged and the oppressed. He is a passionate advocate of inter-faith harmony, his commitment to pluralism witnessed most recently in his going to a market in Mysuru to buy halal meat when a ban on the product was sought to be imposed by thugs of a Hindutva persuasion.

In July this year, Mahadeva published a tract outlining his views on the Rashtriya Swayamsevak Sangh. A week after it was printed, the website, The News Minute, reported: “A critical exploration of the RSS, the book has been flying off the shelves since its release, prompting the state’s rightwing ecosystem to unleash all its arms to discredit both the book and its author” (https://www.thenewsminute. com/article/Devanura-mahadevas-new-kannada-book-bestseller- andsangh-fuming-165974). MPs of the ruling Bharatiya Janata Party, as well as those who pass as ‘intellectuals’ on that side of the political spectrum, unburdened themselves with a torrent of abuse aimed at the author. No matter; the tract sold tens of thousands of copies, being discussed and debated in the farthest corners of the state.

Happily for those of us who do not read Kannada, Mahadeva’s pamphlet is now to appear in other languages, including Tamil, Telugu, and Malayalam. I have recently been reading the English translation, by S.R. Ramakrishna, which is soon to be published as a book.

The main text begins with quotations from M.S. Golwalkar and V.D. Savarkar, the two ideologues who have shaped Hindutva as it is today. Here we find Golwalkar justifying the caste system and its in-built hierarchies on the grounds that they have scriptural sanction, and Savarkar urging worship of the Manusmriti, notwithstanding the fact that its endorsement of caste and gender inequalities is so antithetical to the Indian Constitution. The Savarkar quote chosen by Mahadeva is especially telling: “Manusmriti is that scripture which is most worshipable after Vedas for our Hindu Nation and which from ancient times has become the basis of our culture-customs, thought and practice. This book for centuries has codified the spiritual and divine march of our nation. Even today the rules which are followed by crores of Hindus in their lives and practice are based on  Manusmriti. Today Manusmriti is Hindu Law. That is fundamental.” Another quote from Golwalkar has the RSS ideologue calling the federal system of a union of states “poisonous”, urging instead a unitary political system based on the homogenising principle of “One Country, One State, One Legislature, One Executive”.

Devanura Mahadeva draws our attention to the crudity of what passes for thinking in the RSS. The sangh’s Bible, as it were, is a book of Golwalkar’s titled Bunch of Thoughts, but, as Mahedeva writes, “if you look inside this book for anything that could be considered a ‘thought’, or ‘chintane’, you will find absolutely nothing. What it offers is only a set of random, dangerous beliefs, and that too from a bygone time.” (Having read the book several times myself, I entirely concur with this judgment.) The RSS’s ideology is so narrow minded that, as Mahadeva remarks, “forget about anyone else, no sensible Brahmin even can accept this devilish view of the past that the RSS presents.”

Mahadeva writes from the perspective of a defender of the Indian Constitution. For all the lip service leaders of the RSS and BJP pay to that document, in truth they are deeply averse to its core tenets such as pluralism, caste and gender equality, freedom of speech, and federalism. Mahadeva goes so far as to suggest that “the more they damage the Indian Constitution, the more victorious they feel.” He continues: “To destroy the Constitution, the RSS and its affiliates are committing unspeakable acts. They are playing games they shouldn’t be playing. And not just one or two! They are waging a war to overturn the federalism that binds the states and the union government, and that constitutes the bedrock of the Constitution.” Mahadeva acidly remarks that since coming to power in 2014, “the BJP has offered Golwalkar its guru dakshina by burying federalism, by stifling to death the federal system that constitutes a critical part of the Constitution.”

Mahadeva also highlights the scant regard for the truth, the distortions of the historical record, and the fake news that the Hindu Right has long been known for, now amplified by WhatsApp and Facebook. As he puts it crisply: “Falsehood is their family deity.” He examines the many falsehoods propagated in textbooks issued by BJP governments controlled by the RSS, which seek to poison the minds of our children with hatred for Indians who do not happen to be Hindus.

To his credit, Mahadeva acknowledges that political forces other than the RSS and the BJP have also contributed to democratic decline. As he observes: “When you look at India’s political parties, these are the facets you see: (1) single-person led party (2) family-controlled party (3) a party led by an anti-Constitution organisation. All three are detrimental to democracy.” However, it is the BJP that is in power at the Centre and in many major states too. Given the dominant status the sangh parivar occupies today, it was imperative for Mahadeva to focus on the pernicious social ideology of the RSS and its dangerous political articulation through the BJP.

Mahadeva also talks of the promises made by the lifelong RSS pracharak, Narendra Modi, when he came to power, such as the return of black money, the doubling of farm incomes, the generation of millions of jobs. These promises have remained wholly unfulfilled. Instead, economic inequalities and disparities of wealth have grown alarmingly. Among the principal beneficiaries of Modi’s prime ministership have been two industrialists (both incidentally from the prime minister’s home state, Gujarat).

However, it is the ideological rather than economic critique of the RSS and the BJP that constitutes the heart of the exercise. This is a brilliant excavation of the totalising and homogenising impulses of the RSS. In the space of a few thousand words, Mahadeva lays bare its intrinsic authoritarianism, its casteism, and its majoritarianism.

Recently, swayed by an invitation from the smooth-talking RSS sarsanghchalak, a group of elite Muslim males in New Delhi came away thinking that the sangh was amenable to change. They should read Devanura Mahadeva’s pamphlet. So should every thinking Indian, whether Muslim, Hindu, or neither. Mahadeva’s tract distils the learnings gleaned from decades of study and experience. He has carefully read the texts of the most influential Hindutva ideologues; and he has personally witnessed the operations of the sangh parivar in Karnataka. He has seen how organisations like the RSS, the Vishwa Hindu Parishad, and the Bajrang Dal have sought assiduously to expand their footprint in his state by infiltrating the bureaucracy, the judiciary, and the police, by creating fresh disputes around religious sites, by outright thuggery on the street. Mahadeva knows that if the sangh was to be ultimately victorious in Karnataka, it would signal the end of the state’s pluralist and humanist traditions, its rich literary and intellectual culture, the very possibility of reason and civility in public life.

It is thus that Devanura Mahadeva issues a gentle call to action, a plea to all those who oppose the RSS and the BJP to come together on a common platform to restore the foundations of the Republic and rescue it from being further ravaged by the fanatics on the Right. It is worth quoting his call at some length: “At least now, forward looking groups, organisations and parties should rise above being just little streams; they should flow collectively as one river. To be able to do that, they must abandon the unhealthy attitude of being pure and superior to others. They must give up their ego, and develop the humility to accept that hundreds of paths might exist for attaining an aim. They must put an end to their leadership squabbles. Rather than insist narrow-mindedly that they lead, or that their party lead, they must join a broad alliance to save federalism and the Indian Constitution and the diversity that is the life breath of India. They must come together to build a participatory democracy, where all citizens and communities participate, to create a culture that is tolerant, loving and free of distinctions of high and low.”