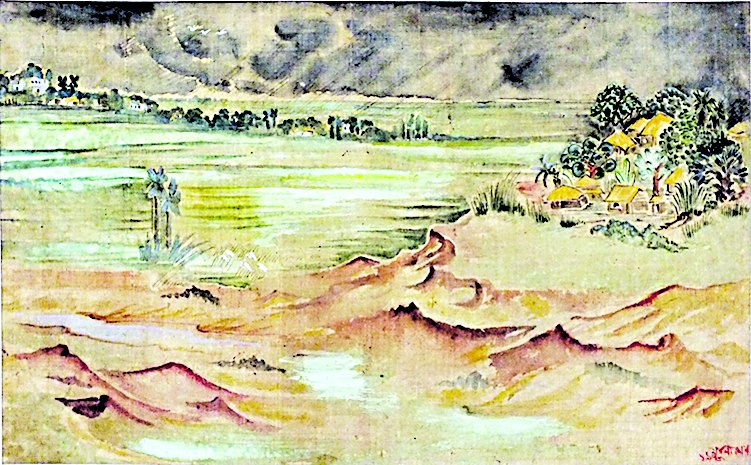 The title of Galleria M's recent show of five London-based artists claimed attention before the works were seen: All S-He Wanted To Be, suggesting an arch blend of human potential, dreams, and postscripted hints of disappointment... beyond gender circumscription. But curator Mary George of London pre-empted viewer response by helpfully telling you what that means. Just in case. And yet, for all her learned explication, the viewer might not have known what to make of some of the works.

Like Cyrus Shroff's Zervos Album, for example. You might be forgiven for concluding that it refers to Christian Zervos's Picasso catalogue. If it did so, the connection remained obscure. If it didn't - for 'album' could be musical as well -where was the "art history" that George promised an encounter with in her note? Perhaps the artist's work would make better sense with more inputs, a bigger selection. In fact, an internet search reveals quite an impressive portfolio which, alas, is denied viewers of the country of his birth. But a stingy sampling can hardly be assessed beyond marking him as a clever, subtle colourist.

In the other Indian-origin artist, Radhika Agarwala, there were playful, evanescent, fairy tale images - including a very folkish tiger - which seemed to offer livelier visual options than her Midnight Void mythopoeia. But then, the pick wasn't enough to go by. The same could be said of Heena Kim, represented by a single work. As for Marlene Steyn, a labyrinthine tangle of fantastical images narrated an excess that's not without a certain seduction. But Hannah Luxton pared down her language into whispering little meditative sonatas with more pauses than notes that spelled a kind of non-religious spiritualism.

In a tribute, Maya Art Space hosted a show of 23 women artists, including those not usually seen or those not around anymore. Like Jamuna Sen (picture), for example, whose watercolour brought back a period flavour through the influence of father, Nandalal Bose. Or her sister, Gauri Bhanja. Then there was the redoubtable Reba Hore, so accomplished in her confidently European idiom. Add to that the presence of seniors like Anju Chaudhuri, Anita Roy Chowdhury and Uma Siddhanta and you can see what a long way women have come in Bengal art.

Of course, the younger generations were represented as well. From Sohini Dhar's romanticism to Amritah Sen's gamesome natter; from Samita Basu's photographic charcoal and pencil to Lina Ghosh's sculpturesque contours, it was a line-up of varied expressions. However, settling for an indiscriminately broad spectrum turned Anandini - the title of the show - into something of an obligatory gesture, without a meaningful focus. But that, perhaps, is only inevitable when womanhood, much like a disability, demands gestures of political correctness.