A primary school was torched and a house vandalised at Tuichawng Chhuah village, dominated by Chakmas, in Mizoram's Lunglei district late last evening. 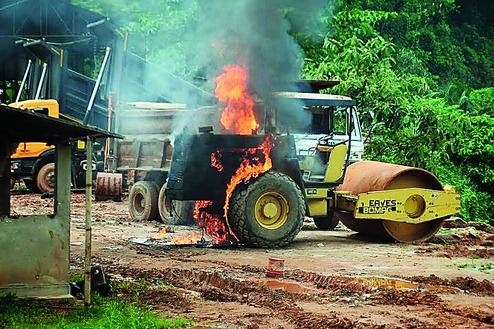 Security has been beefed up as tension prevailed in the village, located around 80km from Lunglei town, district headquarters of Lunglei. The Young Chakma Association today condemned in strongest terms the alleged action by cadres of the Mizo Students Union who burnt down the primary school and demolished the house of Suniti Ranjan Chakma of Tuichawng Chhuah.

Confirming the incident, Lunglei superintendent of police Zosangliana told The Telegraph this afternoon that the situation had been brought under control and a huge number of police and security personnel have been deployed in the area to avert any sort of violence.

"A case was registered today and altogether nine suspects have been arrested. An investigation is on," said Zosangliana.

A release issued by the Young Chakma Association today alleged that Mizo youths had terrorised the Chakma villagers and ordered them to vacate the village by this month, failing which they would "face severe consequences".

"The government of Mizoram provided all facilities such as ration cards and MGNREGA job cards to the villagers and also constructed a primary school under Sarva Shiksha Abhiyan. The Mizo students' body has been trying to evict the villagers since November 2015 on the pretext of illegal settlement which is illogical, irreverent and unacceptable. It is nothing but a way to harass the minority Chakma Buddhists in Mizoram," said the statement signed by Chipam Chakma, publicity secretary of the Young Chakma Association.

However, sources in the police today told this correspondent that the Mizoram government had issued an order on January 21, directing the people of Tuichawng Chhuah to leave the area.