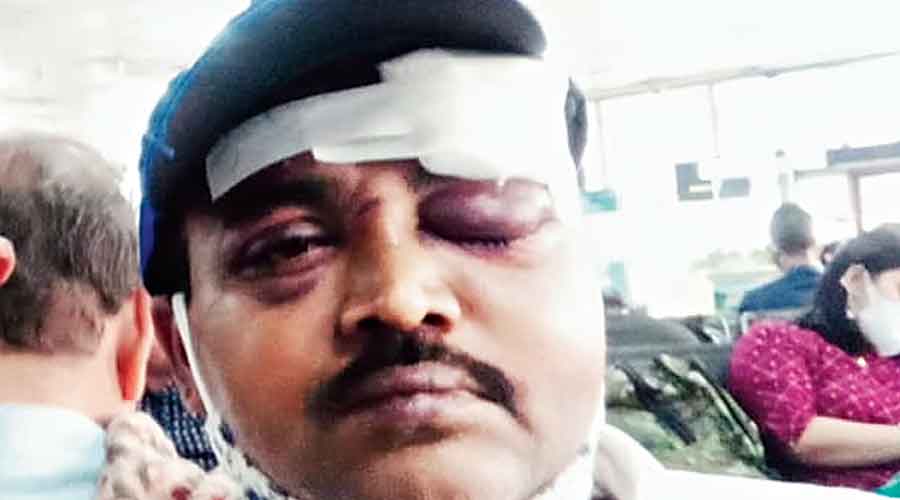 Tapan Kumar Biswas, easily the most recognisable face of poll-related violence that rocked Thursday’s urban body polls in BJP-ruled Tripura, was flown to Calcutta on Friday for treatment to save his injured right eye.

Trinamul candidate Biswas, 50, was assaulted and prevented from voting in ward 51 of Agartala Municipal Corporation by “unidentified” goons.

Reports of widespread intimidation, assault and rigging by goons allegedly hired by the BJP in the 14 urban bodies across Tripura have been flagged by Trinamul and the CPM since Thursday.

The BJP also claimed on Thursday that their members/supporters were attacked in at least 100 places.

Goons reportedly took position at polling booths half an hour before polling started at 7am, an Agartala resident said, adding reports of assault and intimidation of nominees, polling agents, voters started pouring in from around 8am, peaked around 12.30 and petered out by 2.30 pm, ostensibly because of the Supreme Court order. Tripura police claimed the situation was peaceful and they made arrangements to ensure peace during counting on November 28.

Trinamul’s Biswas told The Telegraph that he was beaten up by 30-40 goons while he was on his way to his polling booth with his wife on Thursday and the police did not help.

Trinamul is seeking repoll in Agartala Municipal Corporation. It asked the State Election Commission to prove genuine voters cast their franchise in booths with over 80 per cent turnout. The overall turnout is 81.54 per cent.

Tripura BJP dismissed the allegations of BJP members being involved in violence.

However, BJP MLA Ashish Kumar Saha said there was an atmosphere of fear. “What happened is unfortunate and embarrassing... Voters and polling agents were turned away. There is fear....” he said.

Saha and another BJP MLA Sudip Roy Barman on November 23 hit out at the state leadership without naming anyone on pre-poll unrest.Five-time MLA Barman, whose ties with chief minister Biplab Kumar Deb are at best strained, had blamed the “childish state leadership”.

But BJP spokesperson Nabendu Bhattacharya claimed complaints of polling agents being turned away were unfounded as most of them “did not collect their polling papers".

He attacked Trinamul, accusing them of acting on behalf of the CPM to spread unrest in Tripura.

“Everybody has the right to go to the court. We have full faith in the judiciary. People have voted in large numbers against the conspiracy hatched by BJP’s rivals to foment trouble in the state. The situation is normal,” he said.