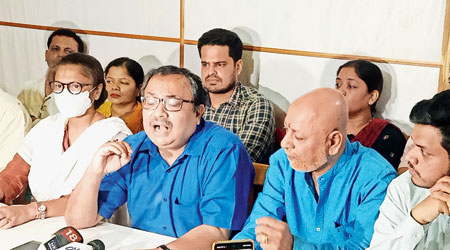 The Trinamul Congress has decided to organise a road show to be led by its national general secretary Abhishek Banerjee in Agartala on September 22 and vowed to move court if police denied permission for the event.

Earlier, the party had first planned to hold the programme on September 15 and then on the following day. But police had denied permission for the proposed show of strength.

Dev Sarkar told the media on Tuesday that they had rescheduled their rally for September 22.

“Let us see how long they can keep denying permission to scuttle a democratic process in the name of law and order and festival. It is clear from the denial of permission that the BJP-led government in Tripura is scared of Trinamul. They are only getting exposed,” Dev told The Telegraph.

Singh said: “Till now, we have abided by what police have said. But we will move court if we are denied permission for the September 22 event or police do not suggest a date that is convenient for them.”

In a fresh application seeking permission and adequate security for the rally, state Trinamul leader Subal Bhowmik pointed out that the party had selected September 22 for the proposed rally to be led by Abhishek Banerjee after ensuring that it did not clash with any festival or other political event.

The Trinamul Congress on Tuesday announced Susmita Dev as its candidate for the Rajya Sabha bypoll from Bengal on October 24. She had left the Congress and joined Trinamul in August.