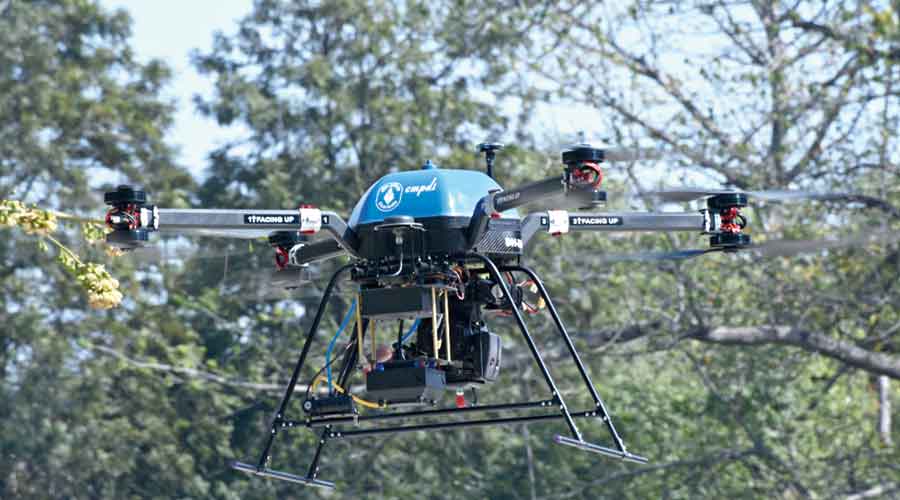 The Tripura government on Thursday announced the setting up of a drone centre at the Tripura Institute of Technology (TIT) to train students in drone technology.

The announcement was made in the proposed budget for 2022-23 tabled by deputy chief minister and finance minister Jishnu Devvarma.

He presented a  Rs 26,892.67-crore tax-free budget that has seen an increase of over Rs 4,000 crore over last fiscal’s budget estimates.

Tripura is the second state after Arunachal Pradesh trying to cash in on the opportunities being provided by the fast-emerging drone sector.

Devvarma, presenting the last full budget of the BJP-led state government before the Assembly polls early next year, said: “I have allocated Rs 5 crore for setting up of a drone Club/Centre in Tripura Institute of Technology Narsingarh to give college students an opportunity to learn, research and train on drone technology, which is emerging at a fast pace.”

Drones or unmanned aerial vehicles have immense utility in the northeast because of its difficult hilly and mountainous terrains and road connectivity issues.

Drones were used in the recent past to deliver medicines in Manipur, Nagaland and Meghalaya.

A senior Tripura education department official said the drone centre to be set up at TIT at Narsingarh, about 12km from capital city Agartala, will “hopefully” start functioning by next fiscal.

“Planning for the centre is at a very preliminary stage. We will be inviting experts to help us set up the centre, which will teach students about drone technology and the use of drones for the benefit of the society at large, especially in the agriculture sector and during natural disasters. This sector has huge job opportunities. It has opened up new career avenues,” the official said.

Like Tripura, the Arunachal government too is betting big on the drone sector.

In January, the frontier state had revealed its plan to establish a drone-training academy to provide technical skills to operate UAVs and generate job opportunities.

The Arunachal Pradesh government had also said in January that it was trying to promote drone technology in the region for last-mile delivery, especially, medicines and carrying out afforestation drive through seed-bombing to increase the state’s green cover.

Few days ago, the BJP-led government in Arunachal Pradesh, too, had in its proposed budget for 2022-23 stressed on the “effective utilisation” of the emerging drone technology in improving various aspects of governance.

Arunachal Pradesh deputy chief minister Chowna Mein had said that the mainstreaming of  the drone technology will create several skilled jobs that did not exist in the recent past, for example drone pilots, maintenance, software, and logistics technicians.

“This new initiative will be implemented by various departments and I am happy to make a provision of Rs. 50 lakh each for the departments of agriculture, horticulture, health & family welfare and forest, environment and climate Change, respectively,” Mein had said.

In this year’s Union budget, the Centre had decided to promote the use of “Kisan Drones” to help farmers for crop assessment and protection and digitisation of land records, among others.

Experts believe that drone operators, drone engineers and drone analysts will be in high demand in the near future in sectors such as agriculture, health, real estate, environment, revenue, entertainment, transport, wildlife, tourism and even for law enforcement.