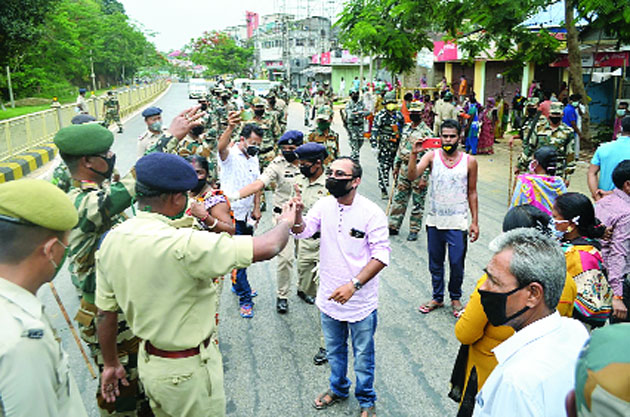 The residents of Guwala Basti near VIP Road in Agartala on Sunday blocked the road, demanding that the state government shift the Covid-19 patients from Saheed Bhagat Singh Youth Hostel following the sudden increase in number of positive cases.

The hostel has recently been converted into a 300-bed Covid-19 care centre.

Radhakant Tiwari, a middle-aged man who was among the protesters, said: “We today protested here demanding that the coronavirus patients be shifted from the hostel which was declared a Covid-19 treatment care centre. Just to protect ourselves from the deadly virus we protested. We too want the patients to be treated, but in a better place.”

The residents also claimed that the people and the medical staff who are staying at the treatment care centre were coming out of the gate and visiting the shops to buy commodities.

They said that could infect residents of the area.

They also accused the police of “lathicharging” them.

“We want the Covid-19 positive patients to be treated in a better and secured place so that nobody else is infected. The police and the civil administration must talk with us to solve the issue. But instead of solving the problem, the police started caning us,” another protester said.

Speaking to the media, Sadar subdivisional magistrate Ashim Saha said: “The Saheed Bhagat Singh Youth Hostel is more than 200 metres from the Guwala Basti and there is no point in protesting. This is not acceptable and we have apprehended a few residents. The residents themselves are not maintaining the social-distancing norms and that poses a threat to all other people.”

“Nobody was injured. We used force and lathicharged to disperse them. We have also arrested five persons and will take legal action against them. The situation is normal but an additional force has been deployed to maintain calm,” a police officer said.