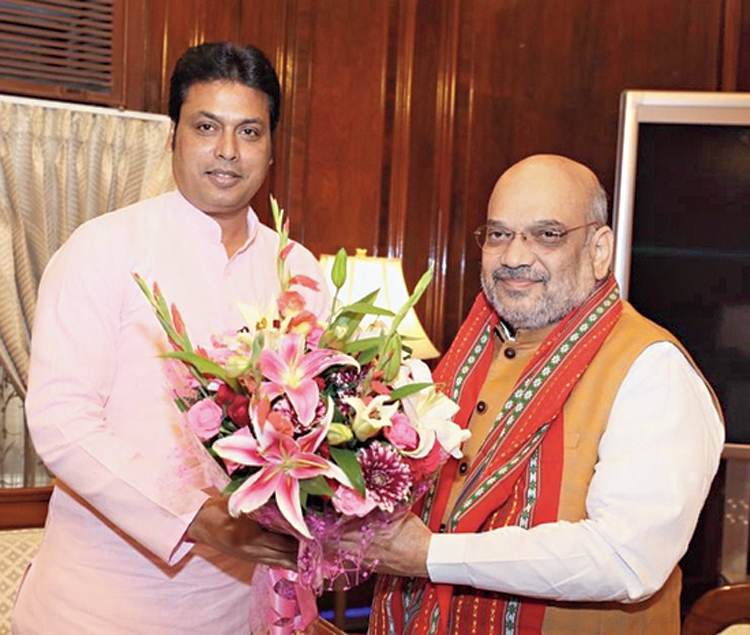 A press release, issued by the chief minister’s office on Tuesday, said Deb had discussed with Shah a special package for the council’s development.

Strengthening the council with adequate funds and power to promote development of the tribal areas in a fast-track manner was one of the poll promises made by the BJP before last year’s Tripura Assembly elections.

The release said Deb also talked about speeding up the CBI investigation against Rose Valley and other deposit-collecting agencies.

It said Deb’s discussions with Shah included expeditious completion of rest of the fencing work on the India-Bangladesh border in Dhalai and Sepahijala districts.

The state government also proposed deployment of homeguards. A reimbursement claim of Rs 91.27 lakh spent for central paramilitary forces in Tripura during 2015-16 was placed before Shah.

Deb requested to increase the honorarium of special police officers (SPO) from Rs 3,000 to Rs 6,156 per month. Tripura currently has 2,830 SPOs serving in different districts.

The press release said the state had given a proposal for deployment of a Tripura State Rifles battalion outside the state.

“The chief minister has requested the Union home ministry not to withdraw the Assam Rifles from the state. He demanded that in case of withdrawal, the assets and infrastructure of the Assam Rifles be handed over to the state government. He also discussed about the Tripura Industries (Facilitation) Bill 2018,” the press release said.

Shah assured Deb that all issues would be “positively” and “quickly” considered for the betterment of Tripura, the press release said.

One-third of Tripura’s population are from 18 tribal communities. Most of them live in the TTAADC which is spread across 7,132.56 sq km, covering 68 per cent of the state’s geographical area.