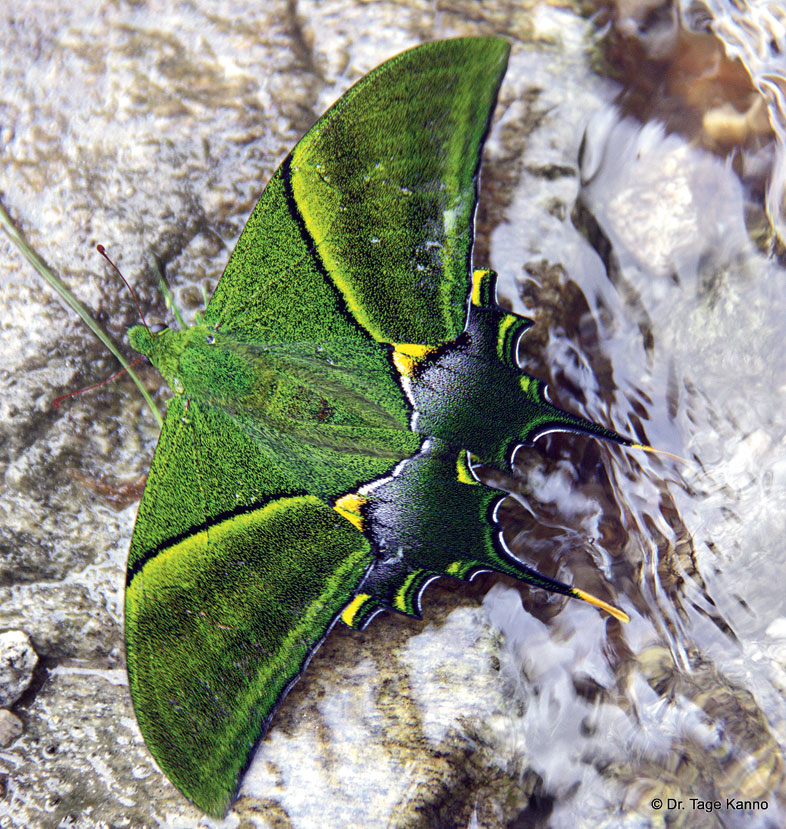 Butterfly lovers feel the decision of Arunachal Pradesh to declare Kaiser-i-Hind as a state butterfly will boost butterfly tourism and save the species from extinction in the state.

The state wildlife board on Friday accepted the proposal to declare the Kaiser-i-Hind (Teinopalpus imperialis), a rare butterfly found in the state, as the state butterfly.

Declaring an official state representation requires a government notification, so the Arunachal Pradesh chief minister, Pema Khandu, requested the department to send the proposal to the cabinet in its next sitting.

Kaiser-i-Hind (Teinopalpus imperialis) is one of the most elusive swallowtail butterflies, with a 90mm to 120mm wingspan. It occurs in Bengal (Darjeeling), Sikkim, Assam, Arunachal Pradesh, Manipur, the Khasi hills of Meghalaya as well as outside India in Nepal, Bhutan, Myanmar, southern China, Vietnam and Laos. The butterfly keeps to the top of trees and is therefore difficult to capture. It was once plentiful in the Khasi hills, near Cherrapunjee.

It was captured live on camera by a few participants during the three-day Ziro butterfly watching meet in Talle valley wildlife sanctuary in 2014. The first dead specimen of Kaiser-i-Hind was recorded in Sikkim by Usha Lachugpa, a senior forest official of the state, in 2012.

Koj Rinya, the divisional forest officer of Hapoli forest division, who had moved the proposal to declare Kaiser-I-Hind as a state butterfly said Kaiser-i-Hind is a rare and spectacular swallowtail butterfly species. It is protected by Indian law under schedule II of Wildlife (Protection) Act, 1972.

This butterfly is an IUCN red-listed species. “Declaring it a state butterfly will give a fresh impetus and emphasise the conservation efforts by the department and the local communities. It will boost butterfly tourism in the state and Northeast,” she told The Telegraph. “Once it is notified a state butterfly, we will think about its habitat conservation,” she added.

Butterfly expert Monsoon Jyoti Gogoi said the species is only confined to very few pockets of Arunachal Pradesh and if not conserved, the species will become extinct . “The decision to declare it a state butterfly is itself a step to save the species from extinction in the state,” he said.

“The species shows the importance of high-elevation wooded forest and hence they should be conserved and Talle valley of Ziro is one of the few remnants of this type of forest. The butterfly also increases the potential of butterfly-based community tourism in the state,” he said.

Minom Pertin, the deputy director of the Society for Education and Environmental Development, a NGO, said the conservation of butterflies must be taken more seriously with steps to study the butterflies in the state in a more scientific way now.

“But I feel that a more common butterfly should have been selected as state butterfly, as the Kaiser-i-Hind is so rare that many people won’t see it in a lifetime,” he added.