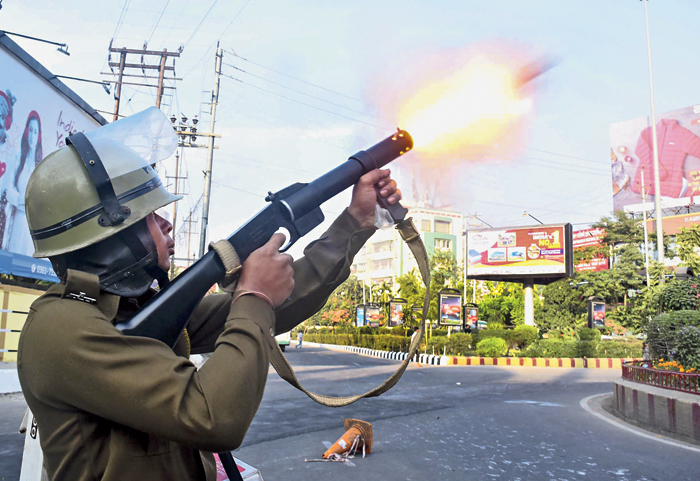 Thousands of people hit the city streets here on Thursday, defying curfew and army deployment, in protest against the Citizenship (Amendment) Bill. One person died and many were injured as protesters clashed with police and the latter resorted to firing to control the situation.

Protesters poured onto the streets throughout the day but the situation turned really tense in the evening after a few hours of lull around noon. They blocked roads, burnt tyres and dispersed as the police arrived. In a few places, where the protests turned aggressive, security personnel resorted to lathicharge, blank firing and use of tear gas shells and stun grenades that left one dead and an unspecified number of people injured.

An army official said, “The army conducted a flag march in Guwahati on Thursday morning. The situation has become very volatile and the army is taking all measures to control the situation.”

Speaker after speaker condemned the Union and state governments. AASU president Dipanka Nath said they would observe December 11 as Black Day in the Northeast every year in protest against the passing of the “divisive and contentious” bill in Parliament. The KMSS also appealed to people to defy curfew and protest against the bill.

The Lok Sabha passed the bill on Monday and the Rajya Sabha on Wednesday. The bill seeks to grant citizenship to non-Muslim migrants of six communities from three neighbouring countries, a move which has been vehemently resented by the Northeast as it would “pose a threat to the culture and identity of the indigenous people”.

Around 5pm, protesters marched towards the secretariatfrom Latasil. They were stopped near Dispur SBI Bank, where director-general of police Bhaskar Jyoti Mahanta urged them to maintain peace. He allowed them to pass after they promised to march peacefully.

However, security personnel had to open fire at Lalung Gaon, Lachit Nagar, Hatigaon, Basishta Natun Bazar and Rukminigaon after protesters hurled stones at them. The protesters claimed that at least four persons were injured at Lalung Gaon and one critically injured in Lachit Nagar firing died at Gauhati Medical College and Hospital. The toll may rise.

Protesters returning from Latasil also tried to attack the AGP headquarters at Ambari but were prevented by security personnel. They also pelted stones at the DGP’s convoy at Christian Basti. Two constables were injured. The house of Santanu Bharali, legal adviser to the chief minister, was also vandalised. Around 1pm, protesters and security forces clashed in front of News Live, a private television channel on GS Road which is managed by the wife of cabinet minister Himanta Biswa Sarma.

The general secretary of Gauhati University Post-Graduate Students’ Union, Moon Talukdar, said, “The students were protesting peacefully and came out with a rally in protest against the bill. But the security forces caned the students and resorted to blank firing and used of tear gas shells. Many students were injured during the firing. We were stopped at Adabari.”

Hemanta Saikia, a protester at Hatigaon where two bikes were torched, said, “We stand firm against any bill or act that threatens or harms the people’s interest. We are ready to make sacrifices to oppose the bill. It is the question of our identity.”