From world famous football clubs to political and spiritual gurus, all lend a hand to the state 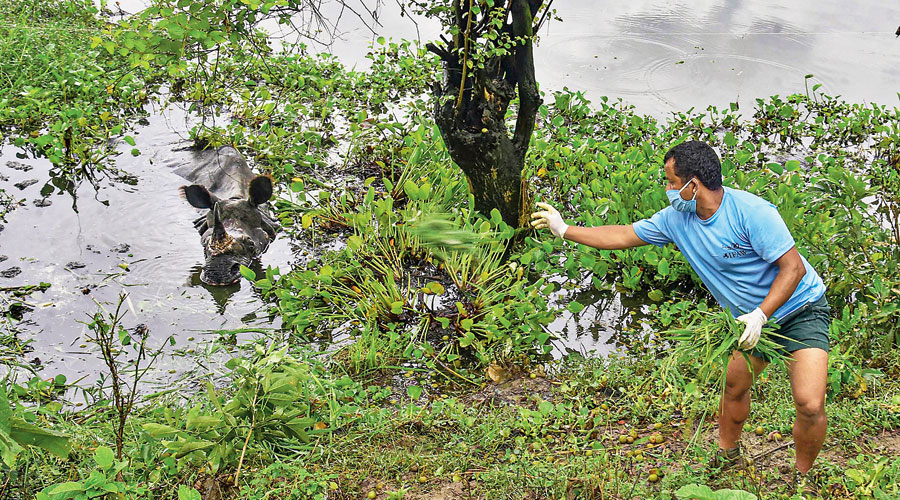 An official tries to feed a rhino resting near National Highway 37 after straying from the flood-affected Kaziranga National Park in Assam on Saturday. At least 96 animals, including seven rhinos, have drowned. Since end-May, as many as 53 lakh people in 30 of the 33 districts in Assam have been affected by the floods.
PTI
Umanand Jaiswal   |   Guwahati   |   Published 19.07.20, 02:49 AM

“Our thoughts are with everyone affected by the floods in Assam,” Chelsea FC, also known as The Blues, posted in Assamese on its Facebook page on Saturday. Within eight hours, the post had garnered 450 comments, over 3,600 likes and over 1,700 shares.

Actor Adil Hussain, who is from lower Assam’s Goalpara district, was the first to tweet about Chelsea’s gesture. “It was @Arsenal now it is @ChelseaFC has expressed their support for the #AssamFloods. My disappointment yesterday with our Actor, Sportsman celebs, I guess, stemmed out of my Helplessness for not being able to do much myself.”

Arsenal FC, also known as the Gunners, posted on Instagram on Friday, “We are with you” followed by its Assamese translation and a comment “Stay strong, Assam”.

Congress leader Rahul Gandhi also tweeted on Saturday that the nation was standing with Assam and urged party members to extend all possible help to the flood-hit.

The Dalai Lama has also written to Assam chief minister Sarbananda Sonowal expressing his sadness over the death and destruction.

Social media has been flooded with photos of destruction and cries of helplessness  which could be behind the attention towards the deluge in Assam from within the country and abroad.

It has prompted All Assam Students’ Union adviser Samujjal Bhattacharjya to say it was “disheartening” that the government was still turning a blind eye when the world was standing beside Assam.

Though floodwaters have started receding, the magnitude of the destruction is coming to the fore. Quite a few affected may have lost their lands and livelihood, Shafiul Hassan, who runs an NGO in Barpeta, one of the worst-affected districts, told The Telegraph.

The floods have also hit Kaziranga National Park, submerging over 85 per cent of its area. At least 96 animals, including seven rhinos, have drowned.

The state has been also battling the Covid-19 pandemic, which has so far infected over 21,000 people and claimed 51 lives.

A health ministry forecast says the state could record over 64,000 positive cases by August 15, a senior official said in Guwahati. The Centre has asked Dispur to prepare for the situation.