Advertisement
Home / North-east / Stand up for what is right: Bhushan

Stand up for what is right: Bhushan 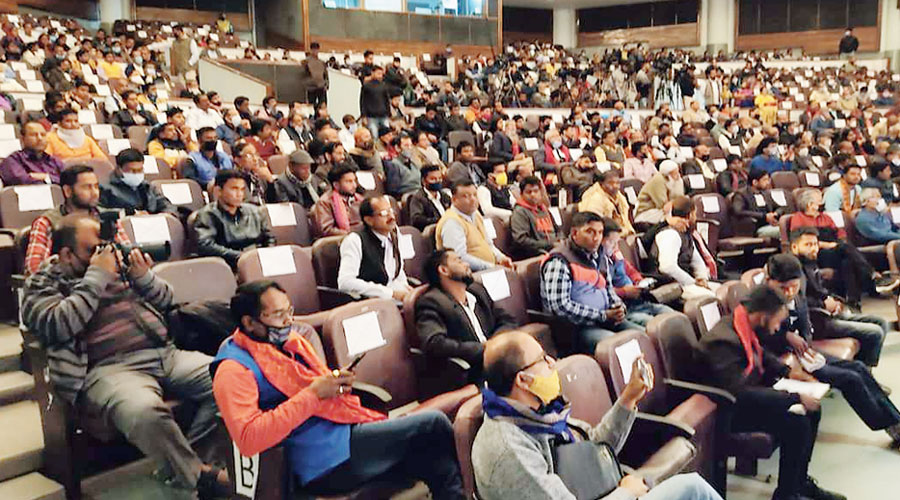 Participants in the citizens’ convention held in Guwahati on Sunday
Sourced by correspondent
Umanand Jaiswal   |   Guwahati   |   Published 21.12.20, 04:37 AM

Lawyer Prashant Bhushan on Sunday appealed to the public to stand up for what is right and against injustice to “reclaim our Republic” which is “experiencing” a crisis like never before under the BJP-led government.

Addressing a citizens’ convention organised by Axom Nagarik Samaj in Guwahati online, Bhushan said there was an “assault” on the economy, on dissent, on truth, on civility, on the judiciary, on Parliament, on the media and on government institutions, among others, under the ruling dispensation.

“We are seeing a full-blooded communal and fascist attack on every institution and every value we hold dear in a democracy and in our Constitution. We are experiencing a crisis of a kind which we have never seen before in the country since Independence. So the task is to somehow reclaim our Republic,” he said.

He added: “And for that, all of us who value the Constitution, value civilised discourse, value dissent, value fundamental rights, must stand up together to face this assault. We must not be fearful of being labelled or targeted or being sent to jail... Together we need to stand up for what is right and against injustice. It is not merely a crisis or an issue regarding the implementation of the Assam Accord or the NRC. It is a much deeper crisis of democracy and of civilisation that we are facing.”

The convention comes two days after the Samaj released an appeal signed by over 300 intellectuals, artistes, public figures and writers highlighting the “divisive agenda” of the BJP-led government before next year’s state elections instead of fulfilling the “tall promises” made by it in its vision document before the 2016 Assembly polls.

Bhushan, who was in August held guilty by the Supreme Court for contempt of court for two tweets against the judiciary, said the BJP government has “betrayed” the people of Assam in implementing the 1985 Assam Accord by “converting” the NRC exercise into a religious and communal exercise by “specifically” excluding Muslims from the register and “somehow” including Hindus, who may not be citizens, through the “backdoor” by using the Citizenship Amendment Act.

“It is part of the BJP’s design to divide the people of this country on religious lines, divide them into Hindus and Muslims, polarise the people and spread hate against the Muslims in order to win elections. We are seeing this across the board, not only in the manner in which the CAA was brought or the NRC is being implemented. It is also being seen in the cow slaughter laws being brought across the country or the manner in which ‘love jihad’ laws are being brought in state after state. The whole objective is to victimise and terrorise the Muslims and make them into second class citizens...,” he said.

The convention touched upon the need to protect the state’s culture and identity, solution to flood and erosion problem, implementation of Clause 6 of the 1985 Assam Accord, scrapping of the “divisive” CAA, rights over the state’s natural resources, listing and auditing the state’s assets, checking corruption and securing its secular fabric because the Samaj strongly feels that the “divisive narrative and instigating propaganda” of the BJP-led government should be “countered” by stressing on the “humanistic cultural & social identity of the people of Assam”.

The convention adopted two resolutions — taking to the people an alternative political discourse that is secular and inclusive to defeat the divisive political forces by uniting all regional and national anti-BJP forces and extending all support to the ongoing farmers’ protest against the three farm laws as well as seeking their repeal, Samaj general secretary Paresh Malakar told The Telegraph.

Reacting to Bhushan’s criticism, BJP state unit chief spokesperson Rupam Goswami said they are professional people without any ideology. “Their observation has no value. But people across the country have faith in the BJP and Prime Minister Narendra Modi ji, a reason for the party’s growth,” he said.