Sikkim was not included in the 2018 tiger census 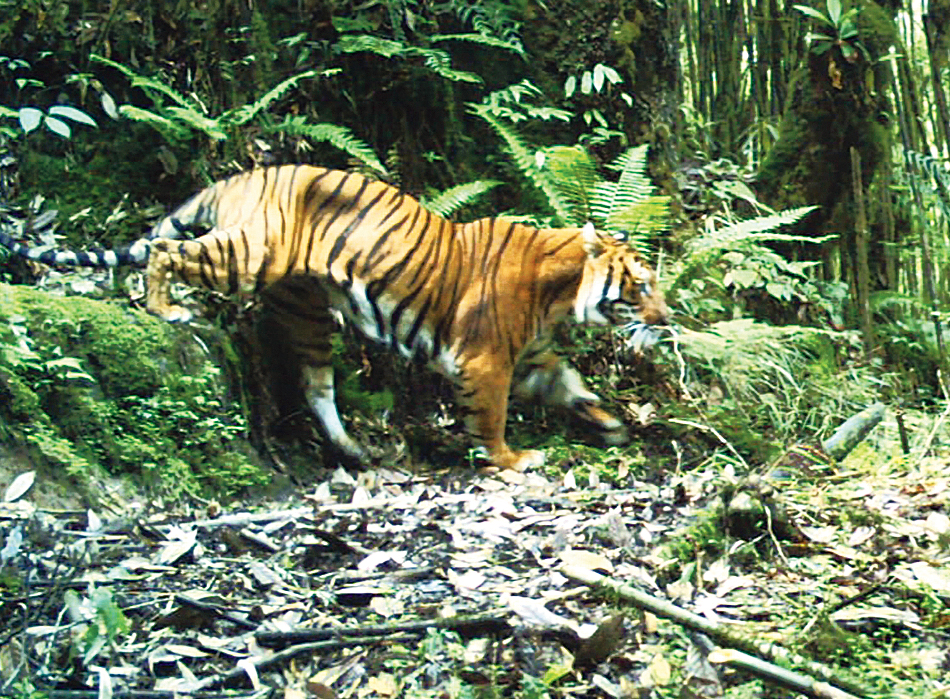 Frequent sightings of tigers in the higher altitudes of Sikkim in recent past have fuelled hope of a robust ecosystem for big cats in the eastern Himalayan state.

Researchers said a detailed investigation was needed to explain the reasons for the presence of big cats in those areas.

The latest sighting was recorded at Gamthangpu, above Lachen in North Sikkim, on June 21 when one of the camera traps captured images of a tiger.

Gamthangpu is located at an altitude of 11,800 feet.

The Sikkim forest department had for the first time captured on camera a Bengal tiger roaming the Pangolakha Wildlife Sanctuary in the district of East Sikkim in December 2018. The big cat was caught on camera near Goru Jurey at an altitude of 9,583ft at 6.23pm and again at 7pm on December 6.

Between December and June, there were at least two more sightings, including one in February.

The cameras that captured the tiger in June were set up as part of a high-altitude tiger project launched by the National Tiger Conservation Authority in collaboration with the World Wildlife Fund and the Global Tiger Forum.

The previous sightings were recorded as part of another project, launched in collaboration with the Japan International Cooperation Agency.

M.L. Srivastava, the principal secretary of the forest department, said frequent sightings indicated that Sikkim was a thriving circuit for the big cats. “Such multiple sightings suggest that the ecosystem in Sikkim is suitable for tigers,” he added.

The cameras had also captured images of other animals like red panda, red fox, wild yak and musk deer, which suggest there is enough prey base in the area, said another official of the Sikkim forest department.

Conservationists, however, said no detailed study had yet been done on the presence of tigers in the eastern Himalayas. “Tigers are known to have existed in the high altitudes of the eastern Himalayas for years. But in the absence of adequate research, it is difficult to make sense of their high-altitude habitat,” one of them said.

Researchers found a promising tiger population over the past few years in the upper reaches of Dibang Valley in Arunachal Pradesh, at almost 12,000 feet.

The 2018 tiger census divides India’s tiger habitats into five major landscapes. The Northeast hills and Brahmaputra landscape had 219 tigers and Arunachal Pradesh 29 tigers, according to the 2018 count.

Sikkim was not included in the census.

“One or two sightings are not enough for including a state in the national count. If there are repeated sightings, we will take a call,” said Y.V. Jhala, a senior biologist at the Wildlife Institute of India (WII) in Dehradun and the coordinator of the tiger census.

Some officials of the Sikkim forest department are of the opinion that the tigers in Sikkim have migrated from the Neora Valley National Park in Kalimpong.

According to a WII scientist, the sighting of an increasing number of tigers at high altitudes could be because of rising temperature in the low-lying original habitats.

A senior WWF official, however, cautioned that no conclusion should be drawn without a detailed and long-term research. “The tiger is a resilient and highly adaptive species. As long as there is a decent prey base and a secured breeding space, it can thrive in diverse settings — ranging from cold Siberia to swampy mangroves of the Sunderbans,” the official said.