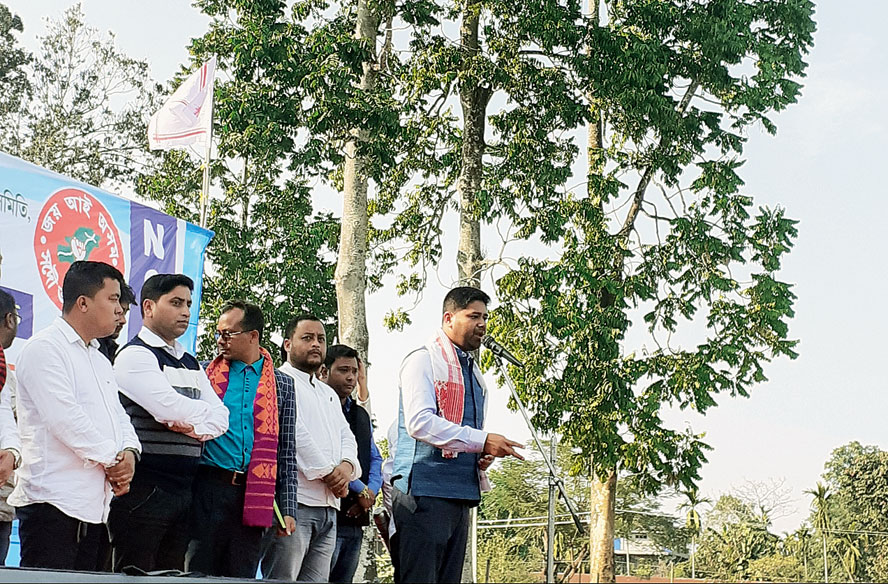 Environmentalists, wildlife workers, naturalists, eco-warriors and protesters against the Citizenship Amendment Act (CAA) said the movement against the law is also an honest effort to save Assam’s greenery and natural resources.

“Protesting against the Act is an honest effort to save Assam’s greenery as noted wildlife expert and environmentalist Robin Banerjee who founded Kaziranga Wildlife Society did, as Indira Gandhi did by formulating the Wildlife Protection Act, as Padma Shri Jadav Payeng and Moharana Choudhury are doing,” the secretary of Green Bud, Devajit Moran, told The Telegraph here on Sunday.

On how the CAA protest will save the state’s greenery, he said, “At a time when the green cover of Assam is rapidly depleting, the CAA movement will be able to bring it back when the Act will be withdrawn and Assam Accord implemented. The forestland encroached by illegal migrants or flood-affected people since decades will be evacuated when lakhs of Bangladeshi foreigners will be detected and deported. One can check illegal encroachment records of reserve forests of the state. Can anyone justify the settlement of illegal migrants on the basis of religion when it threatens greenery and flora and fauna? The state works as the lungs for the rest of the country,” Moran said.

“From time to time, the government takes steps to clear illegal encroachment from the forests which occurs due to the imbalanced population of the state, primarily due to illegal migration from Bangladesh. In 2017, Namphai reserve forest officials had removed 150 huts on 25 hectares of land. The forest, which is spread over 2,117.4 hectares in Upper Assam, is often encroached upon by suspected Bangladeshi intruders,” Moran said.

Environmentalist Sanjay K. Gupta said, “The identity of the state and its people across the globe is not only for its language, literature, music and culture but also in its green and clean environment from Majuli to Sadiya, Barak to Brahmaputra, its hills and mountains, forests wetlands, the flora and fauna from rhinos to leopards, elephants to hoolock gibbons.”

Jadav Payeng, the Forest Man of India, said, “The public and the government both breath oxygen from trees, even if they are not planting trees. They should be aware of it.”

Binay Dubey, a member of the central committee, All Assam Students Union, said, “I think the CAA protest is also a protest to safeguard heujia Axom (green Assam). An overburdened population will not only reduce forestland but also threaten wildlife species and cause the loss of our identity. The land, which is a shelter for hundreds of endangered wild creatures and avians, trees, plants, herbs and shrubs and attracts thousands of tourists and researchers from across the world, may raise concern over the CAA issue globally.”

Through the CAA, six persecuted communities from three neighbouring countries (Bangladesh, Afghanistan and Pakistan) who had entered the country before December 31, 2014, even without valid documents, will get Indian citizenship.

Deforestation, earth-cutting and extension of residential settlements and croplands have reduced the natural habitats of animals forcing them to wander in search of shelter and food.

According to government reports, since 2010, 761 people and 249 elephants have lost their lives in human-animal conflict.

A study by the scientists at the Wildlife Institute of India, Dehradun and the Centre for Wildlife studies, Bangalore, has found that leopards have experienced a “human-induced 75 to 90 per cent population decline” over the past 120 to 200 years.