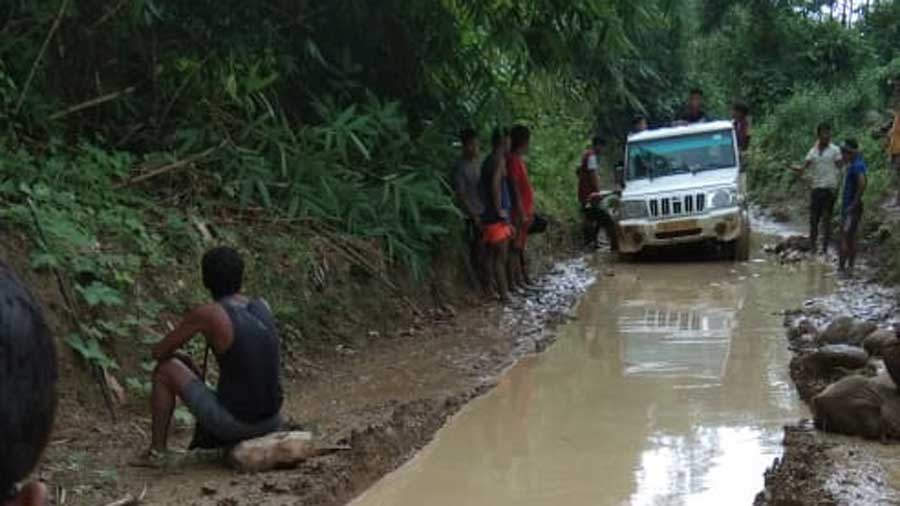 A road which has been under construction for years and which has put human lives at risk has forced four villages in Meghalaya along the India-Bangladesh border to resolve that it would be better if they were given away to the neighbouring country.

The villages have also resolved to seek financial help from Bangladesh to construct the road.

Last week, villagers from Hingaria, Huroi, Lahalein and Lejri came out to give some shape to the deplorable and muddy Rymbai-Bataw-Borkhat-Sonapur road to facilitate the movement of 4x4 vehicles.

These villages, which have a population of more than 5,000, are located close to Bangladesh, and fall under the Lumshnong police station in East Jaiñtia Hills district. These areas are more than 185km away from Shillong.

The villagers had also threatened to boycott the Meghalaya Assembly polls held in 2018.

“All are aware about the pathetic and deplorable condition of the Rymbai-Bataw-Borkhat-Sonapur Road. We need not state how the pathetic condition of the road has affected the livelihoods of the people in the four villages, which has come to a point where the very existence of these people are threatened because of the economic and development issues they face,” Kynjaimon Amse, spokesperson of the four villages, said on Tuesday in a statement.

He said the absence of mobile connectivity and proper medical facilities had crippled life.

“It has come to a point where the people have to rely on Bangladesh for their survival as the government is least interested in these border villages. The world may be facing a lockdown for the first time, but the people of these villages have been under lockdown since their existence as they are cut off without road and communication,” Amse said.

He noted that there have been instances where patients have lost their lives because they could not reach the hospital on time. There are also reports that the people cross the border to reach Bangladesh for medical treatment.

The farmers in the villages are the worst sufferers, he said, as they have to shed huge amounts of money for transporting the products to the nearest market. Sometimes, due to the deplorable road condition, they have to sell their produce at a very rate to Bangladeshi traders.

“Almost all the problems of the people in the villages are linked with the deplorable road condition, and we believe that unless the road problem is solved, there can be no development and growth in the villages,” Amse said.

He said over the last few years, villagers have been running from pillar to post to seek the government’s attention to their plight.

“Even after the matter has taken up by the High Court of Meghalaya and the National Human Rights Commission, the governments at the Centre and state have been reluctant to fulfil the needs of the people,” he said.

Amse said a proposal worth Rs 123 crore for construction of the road has been lying with the DoNER ministry since April 2019. Till date, he said, the ministry has not even discussed about the proposal.

“We have been writing to all concerned for the speedy approval of the proposal, but again, we have received no response. As such, the pain and suffering of the people continues,” he said.

He pointed out that Meghalaya chief minister Conrad K. Sangma and  deputy chief minister Prestone Tynsong, who also holds the public works department portfolio, have assured the villagers that the project would be approved. But the assurance has not shown any result as yet.

Amse said the people in these villages are angry and disappointed with the “step-motherly” attitude of the government towards them.

He said recently, public meetings were held in the villages to discuss the course of action given the fact that the government was not serious enough to resolve their problems.

“It has been unanimously decided that it would be better for the government to give the villages and the people to Bangladesh if the government was unwilling to construct the road for us,” Amse said.

The people, he said, have also decided to write to the Bangladesh government to request for  construction of the road since the Centre and government of Meghalaya “have failed to understand our problems”.

“Prima facie, it is clear that the lives of the border population do not matter at all to the government and we are being used just for votes. If the government really considers us Indians and is serious about our problems, it should immediately address the road problem and interim measures should be taken up to ease the problem, failing which the people will have no choice but to take extreme steps,” Amse said.