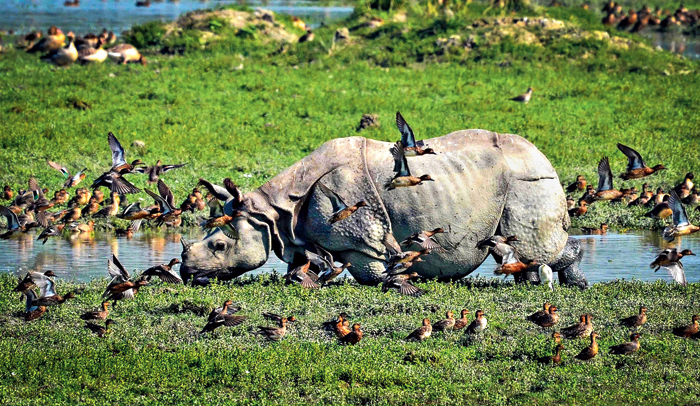 The tourism industry in Assam has suffered a massive loss of nearly Rs 1,000 crore in the violence during protests against the Citizenship Amendment Act (CAA), the chairman of the Assam Tourism Development Corporation (ATDC), Jayanta Malla Baruah, said on Tuesday.

Assam, which usually enjoys a high footfall of both domestic and foreign tourists starting from December, has witnessed tourists cancelling their hotel and travel bookings due to “fear” triggered by violence during the protests.

After the anti-CAA protests started, at least five persons were killed in alleged police firing in the state.

Curfew was imposed across the state, including here, and mobile Internet was also shut down for almost 10 days.

Baruah said, “In December alone, a loss of around Rs 500 crore was estimated and a similar loss is anticipated in January as many tourists have already cancelled their travel and hotel bookings. At least 10 countries — the US, UAE, Canada, the UK, Australia, France, Israel, Taiwan, Russia, and Singapore have issued travel advisories to their citizens travelling to Assam following the incidents.”

“There is likely to be a 30 per cent decline in tourist footfall this season. Besides the loss of revenue and damage of Assam tourism’s global image, over 50,000 people, who were engaged directly or indirectly in the tourism sector, have been affected badly,” he added.

He added, “With our brand of Awesome Assam becoming popular globally, we were expecting not less than 65 lakh domestic tourists and around 45,000 foreign tourists this season. But in contrast to last year, at least 16,041 fewer tourists have travelled to Kaziranga National Park alone this December.”

In December 2018, at least 33,259 tourists were registered at the park known for the one-horned rhino.

According to reports, the hotel industry in the state alone has suffered loss of around Rs 13.25 crore from November 11 to December 25 this year.

“Since normalcy is returning, ATDC expects to slowly start recovering from February onwards. We have also launched an online campaign with Google and it will continue for another six months. There will be montages and video clips circulated worldwide on all popular social media platforms by Google promoting Assam tourism. However, it will take at least two to three years to revive

The ATDC has also planned to organise road shows promoting Assam tourism in Bangalore, Hyderabad, Chennai and Goa in February. Also, foreign embassies would be contacted soon urging to review the travel advisories.

The Northeast Frontier Railway (NFR) incurred nearly Rs 100 crore losses owing to the violent protests against the Citizenship (Amendment) Act across the region since early this month.

An NFR source said, “Due to the violent agitation since December 9 by protesters against the Act in various areas of the NFR jurisdiction, we have incurred a loss to the tune of Rs 100 crore till Monday.”

An NFR official said cancellations of passenger and goods trains also led to the losses.

“Several stations were burnt down, tracks and level crossings damaged and important communication and other electronic gears destroyed during the agitation. Properties to the tune of Rs 10 crore were destroyed in Tinsukia, Katihar, Lumding and Rangiya divisions. The loss in passenger earnings is about Rs 30.13 crore, while it is Rs 63.42 crore in freight earnings. The loss in parcel earnings is about Rs 5.05 crore from December 9 to 30. Nearly 35.86 lakh passengers could not travel in the NFR jurisdiction owing to cancellation of trains,” he added.

“We immediately swung into action to restore train services after the law and order situation improved. Damages in several parts of the region are being repaired,” the official said.