The Baresaharia Bhaona at Jamugurihat here has received the highest footfall ever, leading to a massive traffic jam along the road leading to the venue from Jia Bharali bridge. 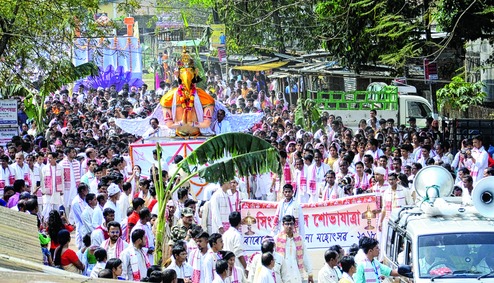 Pakamura Pathar (Sonitpur): The Baresaharia Bhaona at Jamugurihat here has received the highest footfall ever, leading to a massive traffic jam along the road leading to the venue from Jia Bharali bridge.

Ranjit Saikia, a resident of Jamugurihat, said that more than 20,000 people have come from all over the Northeast and their vehicles have clogged the National Highway 15 from Jia Bharali bridge from Friday afternoon. "This is by far the highest footfall we have seen till date," Saikia said.

The Baresaharia Bhaona, the biggest mythological festival of the north bank of the Brahmaputra, was inaugurated on Thursday by Union home minister Rajnath Singh and the first bhaona was performed on Friday night, inaugurated by Assam chief minister Sarbananda Sonowal.

The 220-year-old festival has become a tradition for the villagers, who organise the festival once every five years at Pakamura Pathar when the field becomes empty after harvest.

The festival traces its roots to Pasigaon in Jamugurihat when the villagers first started it in 1797. The villagers still recall how, under the leadership of cultural icon Sonit Konwar Gajen Baruah, an eye-catching cultural program was organised at the venue in 1969 where cultural troupes from Arunachal Pradesh, Meghalaya and Manipur took part. A documentary on the festival was also released in 2013.

There will be as many as 21 bhaonas, which were performed from Friday night, simultaneously in 21 kholas (a temporary stage). This year, altogether 40 bhaonas will be performed at the festival by artistes from 200 villages of different communities, including Nepalis and the tea tribes.

Secretary of the organising committee Bhaba Goswami told The Telegraph that there would be bhaonas in Brajavali language that will tell stories from Ramayana, Mahabharat and the Puranas.

The main mandap has been shaped like a lotus to represent the mythical lotus of Vishnu. Its petals have been added in accordance with numbers of stages or participating villages.

"Altogether there are 21 kholas (stage) where 126 gayans and 210 bayans will be performed every day," Goswami added.

The word Barasaharia means "several villages" and Baresaharia Bhaona has traversed a long way from its inception in 1797 at Jamugurihat. The convergence of religion and culture has given this festival a strong fabric to survive over the years while retaining its quality of storytelling. This style, created by the Mahapurush Sankaradeva, the Vaishnavite saint, is depicted with Bhakti rasa in the form of different raga and tal. The main target of the saint was to unite the diverse society with the spirit of entertainment and promote the Vaishnavism preached by him.

In a traditional bhaona, there is always a group of musicians comprising the gayan (singer) and the bayan (drummer) who begin the orchestra (Jora) in sankari style followed by the entry of sutradhar who recites slokas and narrates the entire story of the drama that will be performed.

The concept of Barechaharia Bhaona is derived from the traditional bhaona and in this festival, unlike other bhaona, it is performed by several teams.

The bhaona is performed simultaneously by teams from the different villages of the region on several stages with the holy altar in the centre. The only materials used here are the locally abundant bamboo, thatch and cane.