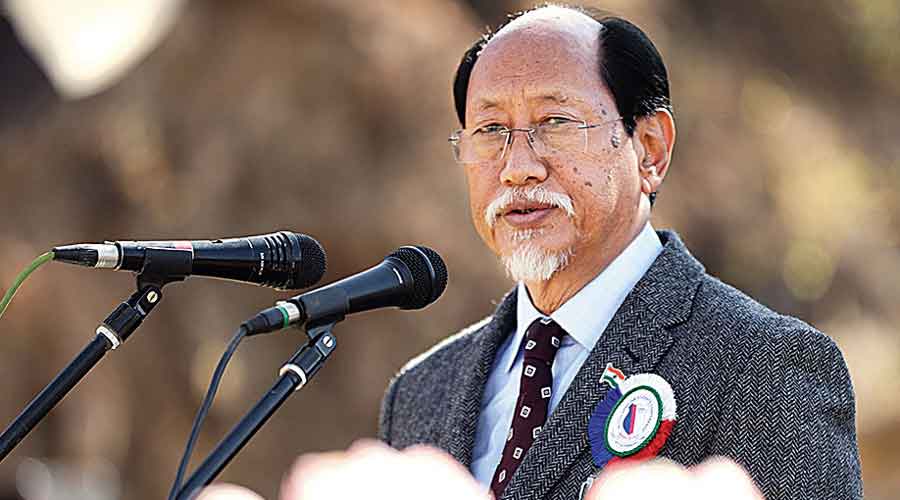 A decision taken by Nagaland’s ruling and Opposition political parties in August to have an Opposition-less government to facilitate an early resolution of one of Asia’s longest-running insurgencies fructified on Saturday with the renaming of the state government.

A joint sitting of Nagaland MLAs in capital Kohima on Saturday unanimously resolved that the Opposition-less government would be called the United Democratic Alliance (UDA).

The state government was earlier called the People’s Democratic Alliance (PDA). The solitary Opposition party, the Naga People’s Front (NPF) that has 25 MLAs, made good on its July pledge to join the new axis.

The decision to have an Opposition-less government to help facilitate an early solution to the decades-old Nagaland insurgency had been inked by state leaders in August but the move got stuck because the BJP’s central leadership “took its time to bless” the initiative of the state leaders, sources said.

This is the second time since 2015 that the northeastern state has had an Opposition-less government. The last such arrangement had been led by the NPF, which lost power to the NDPP-BJP combine in 2018.

Now the government will formally write to the Assembly Speaker and the governor about the changes, the sources said.

Senior leaders of the new coalition government, including chief minister Neiphiu Rio of the NDPP and deputy chief minister Y. Patton of the BJP, tweeted the development along with the resolution.

The office of the NDPP secretary-general tweeted: “The Opposition-less government of Nagaland will now be called United Democratic Alliance (UDA). The nomenclature was proposed by the NDPP president and unanimously adopted by the House consisting of NDPP, BJP, NPF & Independent Members. May Real Unity and Genuine Peace prevail.”

The oppositionless government of Nagaland will now be called United Democratic Alliance (UDA). The nomenclature was proposed by the NDPP President and unanimously adopted by the House consisting of NDPP, BJP, NPF & independent Members.

The pre-poll PDA alliance of the Nationalist Democratic Progressive Party (NDPP) and the BJP had been running the government since 2018 with 34 MLAs in the 60-member House. The strength before Saturday’s deal was 59 — the NDPP with 20 MLAs, the BJP with 12, and 2 Independent lawmakers.

The move to form an Opposition-less government took off after the NPF resolved in July to work with the NDPP-BJP coalition government to expedite the peace process.

The efforts got further impetus when NPF president Shurhozelie Liezietsu recently made it clear that none of the party MLAs should expect any portfolio but be part of an Opposition-less government to help find a solution to the Nagaland insurgency.

The development comes amid fresh efforts by the Centre to steer the stalled peace process to its logical end.

The transfer of Nagaland governor and interlocutor to the peace talks R.N. Ravi to Tamil Nadu and the arrival of retired IB special director A.K. Mishra in Dimapur on Saturday “to hold talks” with the NSCN (IM) — the insurgent group — are being viewed as steps taken by the Centre to put the peace process back on track.

The NSCN (I-M), the most influential rebel group in the region, had been pushing for Ravi’s removal since last year.

The NSCN (I-M) and the government have been in a ceasefire since 1997 but talks have got stuck because of the group’s firm stand in favour of a separate Naga flag and constitution. The NSCN (I-M) is also a signatory to the 2015 Framework Agreement, the base on which the final, amicable and inclusive solution to end the insurgency is being worked out.