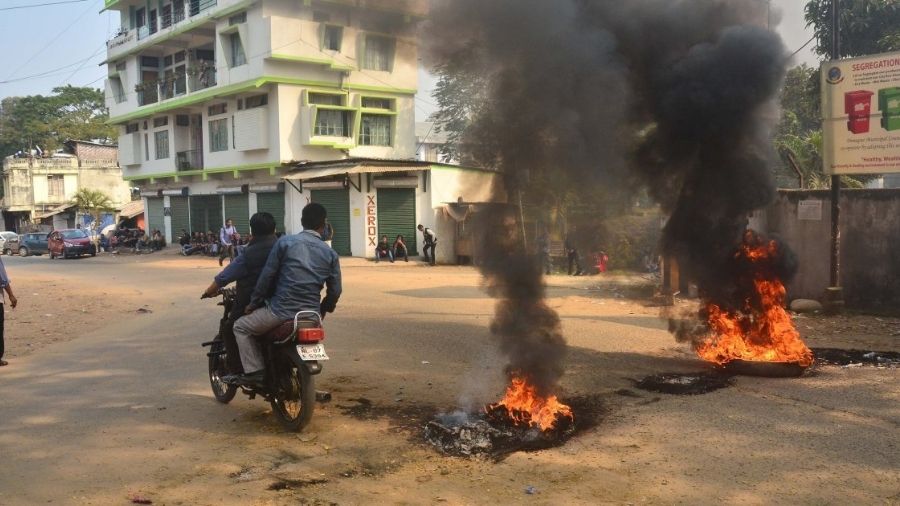 In wake of the series of incidents in Shillong and its outskirts, the Independence Day celebration was held in a very low-key manner.
File picture
Our Bureau, PTI   |   Shillong   |   Published 16.08.21, 10:09 AM

Meghalaya Home Minister Lahkmen Rymbui resigned on Sunday amid violence in Shillong over the police shooting of a former militant.

Rymbui also urged Chief Minister Conrad K Sangma to institute a judicial inquiry into the shooting of Cheristerfield Thangkhiew, the self-styled general secretary of the banned Hynniewtrep National Liberation Council who had surrendered.

"I hereby express shock to the incident where (L) Chesterfield Thangkhiew was killed following the raid of police at his residence exceeding the lawful tenets of the law," he stated in his letter to the chief minister.

"I would like to request you to relieve the Home (Police) Department from me with immediate effect. This will facilitate free and fair inquiry taken by the government to bring out the truth of the incident. I propose judicial inquiry be conducted," he added.

Rymbui’s plea came after the several pressure groups demanded his resignation after the killing of  Thangkhiew, which various groups claimed was a “cold-blood murder”.

Rymbui told PTI that his United Democratic Party also backed the decision to step down.

"I have put forth my papers, after due consultation with my party leadership, to allow a free and fair probe into the killing of Thangkhiew," he said.

UDP, an ally of the Sangma's NPP in the Meghalaya Democratic Alliance government, also urged for a judicial probe into the incident, which resulted in violent protests, Rymbui said.

A source close to the chief minister said the government accepted the resignation as the home minister was unaware of the incident.

On Sunday Black flags were spotted at several locations in Shillong in protest against the “killing” of Thangkhiew, reported Nagaland Post.

The flags were put up by a group under the banner “Voice of Mawlai people”.

In wake of the series of incidents in Shillong and its outskirts, the Independence Day celebration was held in a very low-key manner.

Meghalaya DGP, R Chandranathan said that a SUV vehicle requisition by the State police was hijacked by miscreants near Umshing-Mawkynroh police outpost before it was set ablaze at Jaiaw area.

Chandranathan said the miscreants also decamped with three INSAS rifles and one magazine of the SF-10 personnel from the vehicle, according to Nagaland Post.

Hijackers drove the  SUV vehicle through Mawlai, brandishing the police looted weapon, as witnessed by people along  streets in Mawlai. “The investigation is on to find out the identity of these miscreants,” the police official said.

The Meghalaya government has imposed a curfew in Shillong and banned mobile internet services in at least four districts as vandalism and arson rocked the state capital and nearby areas on Independence Day.

Thangkhiew, who had surrendered in 2018, was shot dead on August 13 when he allegedly tried to attack a police team with a knife during a raid at his house in connection with a series of IED blasts in the state.

Police said they have evidence that Thangkhiew masterminded the blasts after his surrender.