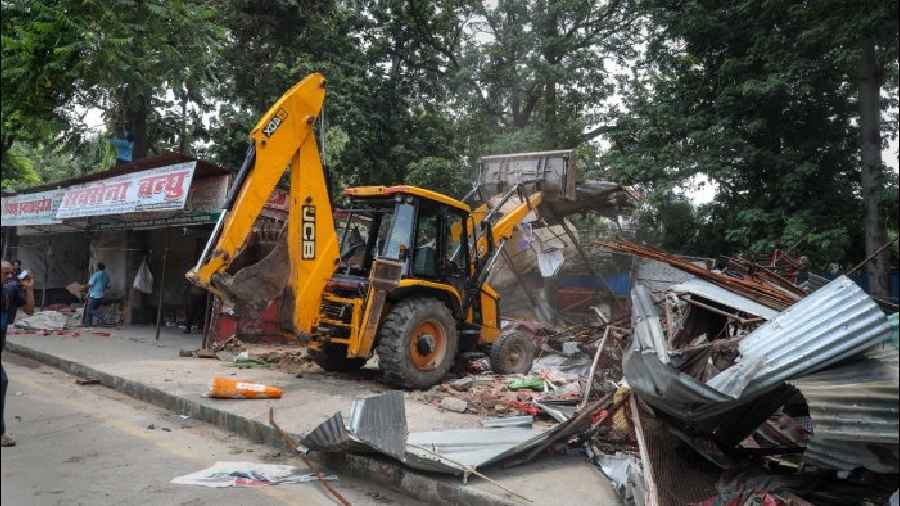 About 50 excavators, heavy machinery and a large number of workers were deployed for the drive to demolish houses in No 3 Chitalmari area in Barchalla on the northern bank of Brahmaputra river, they said.

The process has been peaceful so far with almost all the illegal residents having already left the place with their belongings after receiving the eviction notice, a police officer said.

"The eviction drive has been incident-free so far. There has been no law and order situation," the officer, who is among those overseeing the exercise, said.

The drive began around 5 am and as most residents had already vacated their houses, the structures are being demolished with the help of excavators and other heavy machinery, he said.

The area to be cleared has been divided into three parts and the demolition in one part has been completed by 9 am, another police officer said.

About 1,200 security personnel, including those of Assam Police and para-military forces, have been deployed at the site, equipped with anti-riot gear.

As per government records, 299 families were living in the area, but more than 90 per cent of them have already left after receiving the notice around eight months back.

Some of the residents being evicted lamented that no rehabilitation has been provided to them by the government.

"We have been living here for decades. We have no jobs and live off the fields here. We don't know where we will go," a woman said, gathering the last of her belongings as the excavators approached the structure that used to be her home.

A district administration official said that patrolling in the area by security forces was on since August 31, and that prompted the people to vacate the land voluntarily.

"We could not carry out the eviction drive earlier due to various reasons. Now, most of the people have agreed that this is government land and it will be used for developmental work," the official told PTI.

Locals said that most of the people had migrated to the area several decades ago from Nagaon and Morigaon districts on the southern bank of Brahmaputra following massive erosions.

When asked about the demography of the area, the district official said, "It is a mix of several communities. The most number of families are Bengali-speaking Muslims, followed by Bengali Hindus and Gorkhas."

Ganesh Kumar Limbu, the two-time BJP MLA of the area, claimed that most of the families who lived here have houses in other areas as well, and that is why they left without any protest.

Special Director General of Police (law and order) Gyanendra Pratap Singh had visited the site on Thursday and reviewed the security arrangements.

Speaking to reporters, he had said that one IG-ranked officer and three SP-ranked officers will be present during the eviction drive.

He had also claimed that the land is being cleared as the government is planning to set up a solar power plant at the site.