The MLAs were taken to the Radisson Blu hotel, 15km from the Guwahati airport 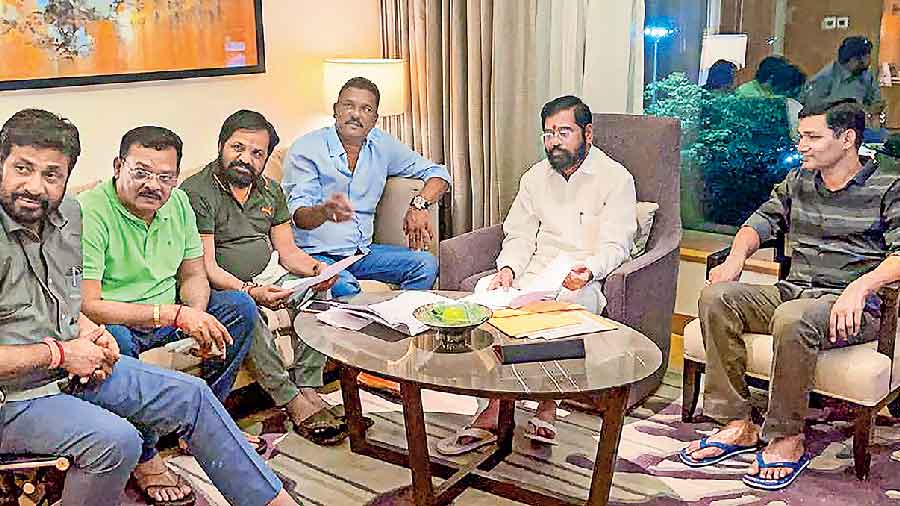 Rebel Shiv Sena leader Eknath Shinde (second from right) with other MLAs at a hotel in Guwahati on Wednesday
PTI Picture
Umanand Jaiswal   |   Guwahati   |   Published 23.06.22, 01:25 AM

Assam’s capital city on Wednesday became the epicentre of the political crisis that has engulfed the ruling Shiv Sena in Maharashtra 2,800km away with the arrival of at least 40 party and Independent MLAs led by rebel leader Eknath Shinde on a chartered flight in the morning.

The Assam Opposition roasted the BJP dispensation for busying itself with aiding efforts to topple a government elsewhere at a time the northeastern state was grappling with debilitating floods and landslides that had displaced over 55 lakh people and killed close to 90 since mid-May.

Soon after their arrival at Guwahati airport from Surat in BJP-governed Gujarat in what appeared to be an attempt to take the dissidents far away from Maharashtra and the Sena’s efforts to placate them, Shinde said there were 40 MLAs with him and that they were committed to the Hindutva ideology of Sena founder Balasaheb Thackeray and would like to take his legacy forward. Shinde said he did not want to comment on anyone.

Sources in Guwahati said the rebel MLAs held discussions among themselves in the hotel where they have been kept and were in touch with their colleagues in Mumbai. The sources claimed a few more Sena MLAs were on their way to Guwahati.

The MLAs were taken to the Radisson Blu hotel, 15km from the airport, in three buses run by the Assam State Transport Corporation under heavy security.

Borgohain said he had come to receive a “few friends” and did not know how many and who all were in the group. Another BJP leader said they were only facilitating the MLAs’ stay and were not aware of what was happening in Maharashtra.

The Opposition in Assam slammed the ruling BJP, accusing it of indulging in politicking when the state was facing its worst crisis.

Assam Trinamul chief Ripun Bora said the BJP-ruled coalition government’s “priority” should have been providing adequate and timely flood relief but it was “busy” toppling a government in faraway Maharashtra.

“We condemn such developments. We will also like to know what is the source of the expenditure on the visiting MLAs. The priority should have been helping the flood-hit,” Bora said.

Chief minister Sarma said he had nothing to do with the developments and was busy with overseeing flood relief. “Moreover, more people should visit during the flood because it will help us earn revenue,” he said.

Outside the Radisson Blu hotel, a posse of security personnel stood guard, turning the upscale property into an impenetrable fortress where the entry of common people has almost been barred for now. Guwahati police have taken over the security from the hotel’s private guards.

Apart from personnel from the nearby Jalukbari police station, dozens of jawans from reserve battalions and commando units of Assam police are keeping a tight vigil on the hotel.

Security personnel, in the presence of senior officers, checked every guest before allowing them entry into the hotel and those without reservation were turned away.

Am ready to resign: Uddhav