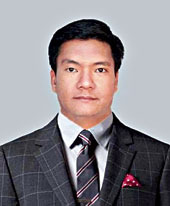 Likabali has been approved as the temporary headquarters of the newly-created district. A deputy commissioner and a superintendent of police will be posted immediately.

The new district will include Assembly segments of Likabali, Basar and Nari Koyu. The operationalisation of the district was approved on the condition that status quo shall be maintained in respect of Kora circle till an amicable solution is arrived at after detailed consultation with stakeholders. Further, the cabinet approved the exclusion of Depi, Depimoli and Detak from Lower Siang district.

The council of ministers took note of the letter written by chief minister Pema Khandu to Union home minister Rajnath Singh regarding the vexed issue of granting citizenship to the Chakma and Hajong refugees and the entire cabinet unanimously endorsed the stand taken by the chief minister. The cabinet reaffirmed that the rights of indigenous people of the state would not be compromised at any cost. These rights are inviolable and enshrined in the Constitution and are protected by various laws enacted from time to time.

The cabinet approved the bill for creation of new Kamle district to be tabled in the Assembly session scheduled for next month.