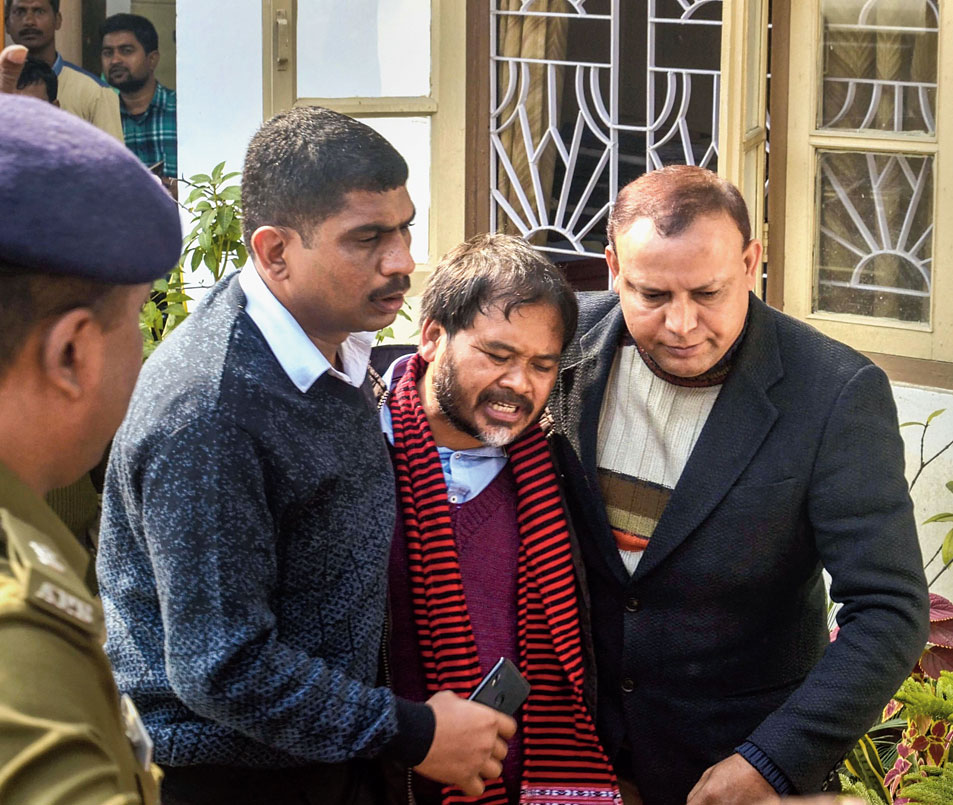 Akhil was arrested by Assam police in Jorhat on December 12 as a preventive measure amid protests against the Citizenship (Amendment) Act. On December 13, Guwahati police registered a suo moto case against him. The case was handed over to NIA on December 14 on the state government’s request. The NIA booked him under the Unlawful Activities (Prevention) Act (UAPA).

On Tuesday morning, Akhil was flown from Jorhat to Guwahati by a special NIA team and produced before a special NIA court here. The NIA sought a 20-day custody but the court granted 10 days.

NIA sources said the agency’s FIR against Akhil mentions that he was in 2009 in touch with the Revolutionary Communist Centre (RCC), which later merged with CPI (Maoist). The FIR, has, however, not been made public.

“Taking advantage of the current situation and the ongoing protests against CAA, Akhil Gogoi was spreading Maoist tentacles and ideology in the state,” the source said.

The NIA has also named KMSS leaders Dhirjya Konwar, Manas Konwar and Bittu Sonowal in the FIR but not arrested them yet.

Akhil’s counsel, advocate Santanu Borthakur, said, “Akhil Gogoi has been heading the KMSS since 2005 and has been arrested multiple times, even under the National Security Act. But no investigation has ever revealed his nexus with any Maoist group. Moreover, after registering the case on December 13 midnight, the NIA took over the case within hours. Therefore, the charges against him were planned and fabricated.”

The court directed the NIA to ensure Akhil’s regular medical check-up every 24 hours, to allow him access to his family and advocate and not to inflict any mental or physical torture on him.

Akhil, while being taken to the court, however, alleged that he was subjected to extreme torture. “The agitation must not stop. It’s a conspiracy to divert the movement but the people of Assam must fight for justice,” he said.

NIA sources said he might be taken to New Delhi for interrogation.

Gogoi asked why Akhil was not arrested earlier if there was something incriminating against him. “Why after the violence? Secondly, why not take action against his organisation?” he added.

Saikia said, “Akhil Gogoi is not a terrorist. He is being punished by the vindictive ruling BJP because he has persistently opposed the anti-Assam policy of the Narendra Modi and Sarbananda Sonowal governments.”