Killing of cadres an act of terror: Naga outfit 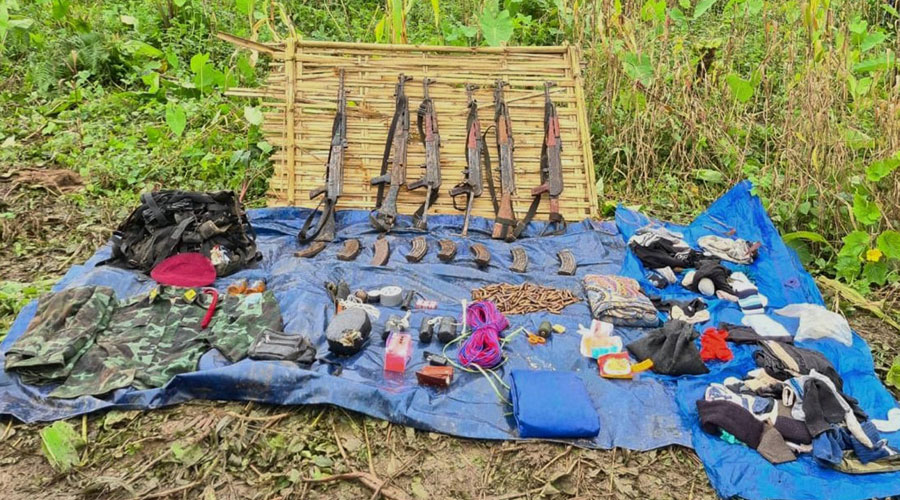 Arms and ammunition recovered after six NSCN (IM) insurgents were killed in an encounter with security forces in Khonsa area of Arunachal Pradesh on Saturday.
PTI
Umanand Jaiswal   |   Guwahati   |   Published 13.07.20, 03:25 AM

The National Socialist Council of Nagalim (Isak-Muivah) said on Sunday that killing of its six cadres in Arunachal Pr­adesh by Indian security forces was an act of terrorism and the 23-year-old truce with the Centre had “lost” its meaning because the ceasefire could make sense only if there was “mutual respect”.

The six members of the outfit had died in an encounter at Nginu village in Lon­gding district of Arunachal Pr­adesh on Saturday morning.

Longding shares border with Myanmar and Mon district in Nagaland.

The NSCN(I-M) and the Ce­ntre had signed an agreement for the ceasefire in Nagaland in 1997. The current Nagaland governor is R.N. Ravi, the central government’s interlocutor who signed the 2015 Framework Agreement with the pro-talks outfit of the militant organisation.

According to the NSCN (I-M), the army and Arunachal Pradesh police made Nginu the “killing field” when six “Naga Army” personnel were gunned down in a “cold blooded” manner.

“It was a well-planned and coordinated act of terrorism by the Indian Security Forces (ISF) personnel. The Naga brave hearts were caught by surprise at the break of the day, overpowered from all sides. Giving them no chance to position themselves, they died fighting to the last man standing,” the NSCN (I-M) said in a statement.

“Indo-Naga Ceasefire of 1997 is for peace and political negotiation to bring permanent peace in Nagalim …. In today’s highly sensitive world it is difficult to imagine ceasefire signed for the purpose of negotiating for honourable political solution and military suppression going on side by side. Significantly, this is the manner of the Government of India in dealing with the Nagas…The goodwill spirit of ceasefire has been stamped to the ground,” the outfit said.

The NSCN (I-M) also referred to the stand-off between Indian and Chinese armies |in the Galwan Valley of Ladakh.

Longding district of Arunachal Pradesh inhabited by the Nagas is not far from the Indo-China border.

“After the Galwan incident in June 2020 where more than twenty (20) Indian Army personnel were killed by the Chinese PLA, this Longding killing of six Naga Army personnel by the ISF personnel may be understood to send the message across that Indian Army will not tolerate any forces who dare to come too close for comfort. It is, however, outrageous for Indian Security Forces to give vent their frustration to their humiliating encounter with Chinese PLA by targeting the Naga Army,” the outfit said.

“What is Government of India trying to gain by targeting NSCN under any slightest pretext when its hands are full confronting the Pakistanis in the Indo-Pakistan border and the Chinese in Ladakh, Sikkim, Bhutan and Arunachal Pradesh? The existence of NSCN should not be construed as a nuisance to India in any manner. And the prevailing Indo-Naga ceasefire signed between the GoI and NSCN is the standing evidence of Nagas’ goodwill towards India to live in peaceful coexistence,” the statement said.