I have high esteem for judiciary, says Biplab Kumar Deb 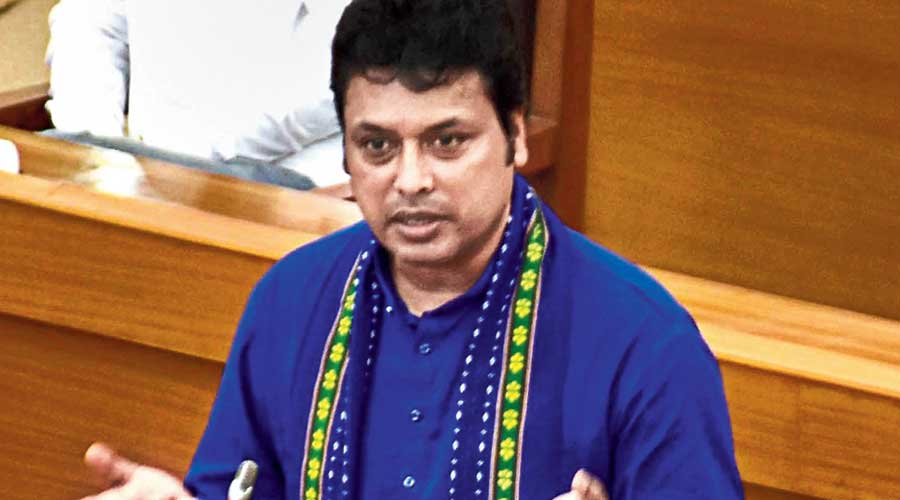 The Trinamul Congress had accused him of being a “disgrace to the nation” for mocking the judiciary at an event organised by the Tripura Civil Service Officers’ Association in Agartala on Saturday.

In a statement posted on Facebook on Monday, Deb said his speech at the event was being “twisted” to “project disregard” to the judiciary and judicial institutions.

“I firmly and unequivocally clarify that I hold all the judicial institutions in highest esteem and also am duty bound to uphold the majesty of the judiciary.  I have not told the officers or even remotely intended to convey any message to disregard courts or disrespect court orders as reported. My words have been published out of context,” the chief minister said.

The trigger for Deb’s reaction was Trinamul national general secretary Abhishek Banerjee’s blistering attack against him on Sunday for exhorting officials in his speech not to be worried about contempt of court.

Abhishek had tweeted: “@BjpBiplab is a DISGRACE to the entire nation! He shamelessly mocks Democracy, MOCKS the Hon’ble JUDICIARY and seemingly gets away with it! Will the SUPREME COURT take cognizance of his comments that reflect such grave disrespect?”

Along with the tweet, the Trinamul leader had also posted a video of Deb in which he is purportedly referring to officials’ reluctance to take decisions citing contempt of court.

.@BjpBiplab is a DISGRACE to the entire nation!

He shamelessly mocks Democracy, MOCKS the Hon'ble JUDICIARY and seemingly gets away with it!

Will the SUPREME COURT take cognizance of his comments that reflect such grave disrespect? pic.twitter.com/0qEAdBQ54r

Trinamul is trying to emerge as an alternative to the BJP in the 2023 Assembly polls and have been assiduously campaigning since May to gain ground among voters.

While the ruling BJP had responded within hours, accusing the Opposition Trinamul and the CPM of spreading falsehood after having failed to gain ground in Tripura, Deb’s response came on Monday.

The BJP also said the clip was first posted by the CPM which was unseated by the ruling party in 2018.

The video of the speech he gave purportedly shows him saying: “Nowadays, a section of officers are scared of contempt of court. They don't touch a file saying there will be trouble. Tell me how many people have gone to jail for contempt? I am there. I will go to jail before you. It is not that easy to go to jail. To go to jail you need the police.  Police are with the chief minister.”

“Court can’t serve notice (without the police). The police will say we have not found him (those facing contempt). But officers will keep saying there will be contempt of court, as it was a tiger. I am the tiger. Power is in the hands of those who run the government...”

Backing the chief minister, Sanjay Mishra, the officer on special duty to Deb, tweeted: “You must listen to the full speech before spreading your fake propaganda....”

BJP spokesperson Nabendu Bhattacharjee told The Telegraph that the chief minister wanted to convey to the officials that they should not stop working or taking decision fearing contempt of court and that the government was there to serve the people and he was there to protect them if there is any trouble.

“That is why the chief minister said he will go to jail before any of the officials,” Bhattacharjee said.

The issue reached the high court on Monday after two advocates made a mention of Deb’s remark, citing as a contempt of court, before a division bench headed by Chief Justice Akil  Akil Kureshi and Justice S.G. Chattopadhya,

“However, the honourable court was satisfied with the chief minister’s statement. After hearing our side, the bench decided not to take the matter forward,” advocate general S.S. Dey told The Telegraph.