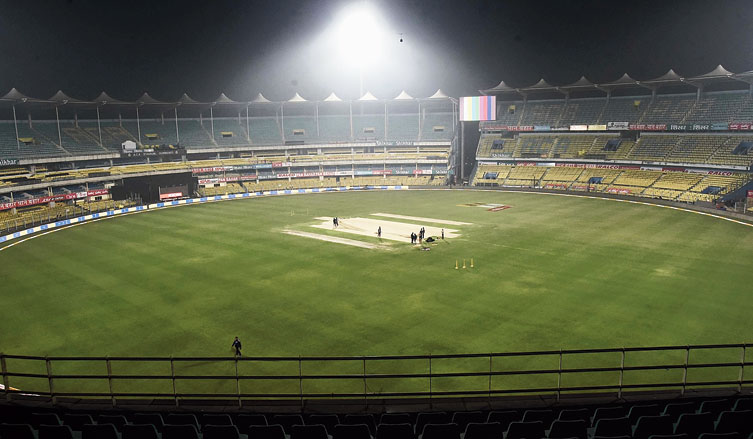 Heavy security arrangements for the T20 international between India and Sri Lanka here on Sunday, because of the ongoing protests against the Citizenship Amendment Act (CAA), has left cricket fans dejected.

On Saturday, hundreds of fans who had gathered outside the Assam Cricket Association (ACA) Stadium at Barsapara to get a glimpse of their favourite players but were not allowed to enter. Police have clarified that even the Tricolour will not be allowed inside the stadium during the match.

Fans will be allowed to carry only three items. “Only mobile phones, money purse and maybe vehicle keys will be allowed,” additional director-general of police (law and order), G.P. Singh, told reporters outside the stadium when asked if the Indian flag would be allowed inside.

This will probably be the first match in recent cricketing history where spectators will not be able to fly the Tricolour in a stadium. Though police have not cited any reason behind the unprecedented security bandobast, the ongoing CAA protests seemed to have forced the organisers to go for this arrangement.

The protests on December 11 and 12 left five persons dead and widespread damage to public property, resulting in banning of mobile Internet services for nine days.

Though there has been no violence since December 12, peaceful protests are occurring everyday. However, on Friday, singer Zubeen Garg had requested the public not to disturb the fixture.

“We have a multiple-layer security system. There will be adequate security on the roads the teams will take and in the stadium. So far, everything is normal. I would like to appeal to the people to enjoy the game peacefully so that such events can take place here again,” Singh said.

Heavy security was deployed on the stadium premises for the last couple of days but it was ratcheted up on Saturday with the deployment of additional forces, including Rapid Action Force (RAF), a specialised wing of the CRPF which deals with riot and crowd control.

The police also used the social media to reach out to the masses to ensure that the game passes off peacefully.

“As we welcome the cricket teams of India and Sri Lanka to guwahati, let’s give them an environment that brings them back to Assam, again & again & again. Let them become the ambassadors of Assam. @assampolice @CMOfficeAssam,” Singh tweeted on Saturday evening.

The heavy security during the training sessions on Saturday, dejected fan Ranjit Hazarika. “I was expecting to get a closer look at Virat Kohli and others while they batted at the nets. I stood on the stretch between Barsapara Tiniali and Dhirenpara but the security personnel would not allow us to go near the gate. It was very disappointing,” he said.

Those who have bought tickets are also unhappy as they are not being allowed to bring the Tricolour. “This is not done. How can they stop us from carrying the Indian flag?” asked another fan.

Cricket has a huge following in the city. It has hosted 14 internationals and will host its 15th fixture on Sunday.