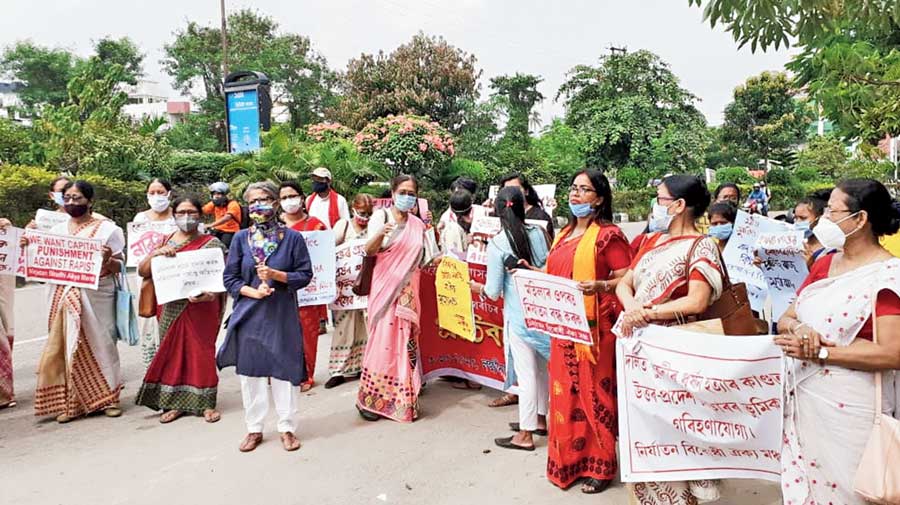 The protest by women organisations in Guwahati on Saturday against the Hathras atrocity.
Telegraph picture
Umanand Jaiswal   |   Guwahati   |   Published 04.10.20, 12:57 AM

Protester: Sir, why are you laughing at us?

Police official: I laugh all the time.

Protester: Don’t you think this is a serious issue? And you shouldn’t laugh at it.

Police official: I laugh all the time, why are you being so serious about it?

Protester: What will happen tomorrow if somebody rapes me?

Police official: Laws are there, many laws and orders to protect you.

Protester: In Uttar Pradesh, a girl was raped, brutally tortured and murdered. Then her body was burnt by the police, without any consent. Then how can we expect safety from the police?

Police official: You are in Assam not in Uttar Pradesh. Why are you so much bothered?

Protester: Sir, do you have a daughter?

Police official: No, I am unmarried.

Protester: Sir, do you have a mother?

Police official: I was born without a mother. I just fell down on the earth.

This is a conversation between a police official and a few women protesters who had gathered at the Rotary Club here on Saturday to seek justice for the Hathras gang rape and murder victim and for victims of similar crimes that took place in Assam since 2019.

The conversation was posted on Facebook in the evening by Rashmi Rekha Borah, one of the organisers of the two-hour protest, because such behaviour “needs to be highlighted and corrected” if we are to check the growing crime against women in the country.

“When we were speaking our mind against the Hathras victim and other similar brutal cases, when we asked for guarantee... for the safety of our lives by the police, we saw they (police personnel) were smiling mockingly at us. When I asked the police official present at site later, the response (see above) I got left us shocked. This is the mentality of our protectors of the society, mentality of the system and mentality of the government, making light of the serious issues such as rape and murder,” Borah, a member of women’s rights outfit Northeast Network, told The Telegraph without taking the name of the policeman.

Borah hopes the social media post draws the attention of the police department, the state government and prompts a discussion on gender issues. “We have nothing against anyone but the government needs to focus on spreading awareness about gender issues,” she said.

The protesters later submitted a memorandum to Prime Minister Narendra Modi through the police commissioner in which they highlighted how crime against women was rising despite the “Beti bachao, beti padhao” campaign by the BJP-led central government.

The 2019 National Crime Records Bureau (NCRB) report published on Tuesday states that Assam has the highest crime rate against women than the national average —177 women out of a lakh were victims of various crimes in 2019 and a majority of these were committed by relatives.

The cases of rape and murder that took place in Assam since 2019, included three from Bokakhat subdivision in Golaghat district and one from Gohpur in Biswanath district.

“We want speedy trial in these cases,” Borah said.

In the memorandum and in their speeches, the protesters sought justice for the Hathras victim, adequate compensation for her family, setting up of fast-track courts to try all rape cases, prevention of rising crimes against Dalit women and investigation of police officials who did not register the cases at the proper time.

“The rise in gender violence has filled the lives of our daughters with risk and danger. Recently, the horrific rape incident of a 19-year-old in Hahras, Uttar Pradesh, the way her tongue was slit and spine was broken by the rapists, has left concerned citizens heartbroken and outraged... Women organisations of Assam condemn this horrific case in strongest words and demand proper investigation of the incident,” the memorandum said.