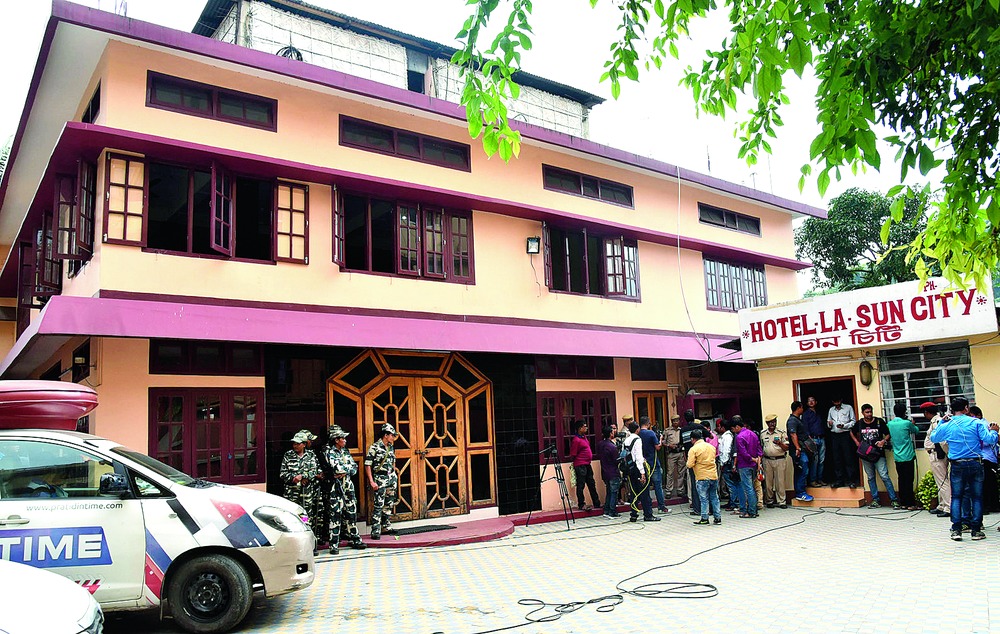 Guwahati, Sept. 21: Four members of a family, including a toddler, were found dead in a city hotel this morning. Police suspect it to be a case of suicide.

The police said the bodies of Prasanta Kumar, 32, a small-time businessman from Burha village in Sipajhar area of Darrang district in central Assam, his wife Pompi Kalita, 26, their one-year-old daughter Meghna and Pompi's sister Anamika Kalita, 21, were found lying on a bed, their mouth covered with froth, in room number 102 on the ground floor of Hotel La Sun City at the Dispur end of Ganeshguri flyover this morning.

"They are suspected to have committed suicide by consuming a poisonous substance like pesticide. We recovered an empty bottle and a few small plastic containers from the room. These have been sent for forensic examination," deputy commissioner of police (east) Hemanta Kumar Das said.

A letter purportedly written by Prasanta, and addressed to Assam chief minister Sarbananda Sonowal and finance minister Himanta Biswa Sarma, was also recovered from the room but Das declined to reveal its contents saying investigations were under way.

An official source, however, said in the letter Prasanta claimed to have collected around Rs 77 lakh from 62 youths, promising them jobs in the police, state health department and Assam secretariat. He claimed to have given the money to one Pulin Gogoi who was supposed to arrange the jobs for the youths but had failed to do so.

"As a result, the job aspirants who had paid Prasanta started putting pressure on him to return the money," he added. "According to Prasanta, Pulin cheated him and in the letter he urged Sonowal and Sarma to order an inquiry into the matter and take strong action against Pulin. He has also named a few other persons as Pulin's associates," the source said.

The police searched Pulin's residence at Sepon in Dibrugarh district this afternoon but he was absconding.

Pulin was a clerk in the police department holding the rank of havildar but was dismissed from service a few years ago for alleged anomalies.

The source said Prasanta also mentioned in his letter that he had a "relationship" with his sister-in-law and that "everyone knows about it".

The family came to Guwahati in Prasanta's dark grey Maruti Suzuki Celerio (AS-01 BU/0113) yesterday and checked into the hotel around 5pm. The hotel cleaning staff became suspicious after repeated knocks on the door between 10 and 10.30 this morning went unanswered.

"We then peeped into the room through a ventilator and saw the bodies lying on the bed. We immediately informed the police," Dilwar Hussain, a staff of the hotel, said.

"In the hotel's guest register, Prasanta mentioned that they had come to Guwahati for medical treatment," he added.

The police broke open the door in the presence of an executive magistrate and sent the bodies to Gauhati Medical College and Hospital for autopsy. An unnatural death case has been registered at Dispur police station.

After receiving news of the deaths, Prasanta's elder brother, Hemanta reached here this afternoon along with his relatives and friends.

They, too, blamed Pulin for the tragedy. "Prasanta was under severe mental pressure for the past few days as the job aspirants from whom he had taken money had given him tomorrow's deadline to return it," Hemanta said.

One of Prasanta's friends, on condition of anonymity, said Prasanta had come to Guwahati yesterday on being called by Pulin who had promised to return the money.

The bodies are likely to be taken to Darrang tomorrow for cremation.