The killings have provoked condemnation and renewed demands for repeal of Armed Forces (Special Powers) Act that gives the military powers to search, arrest and shoot 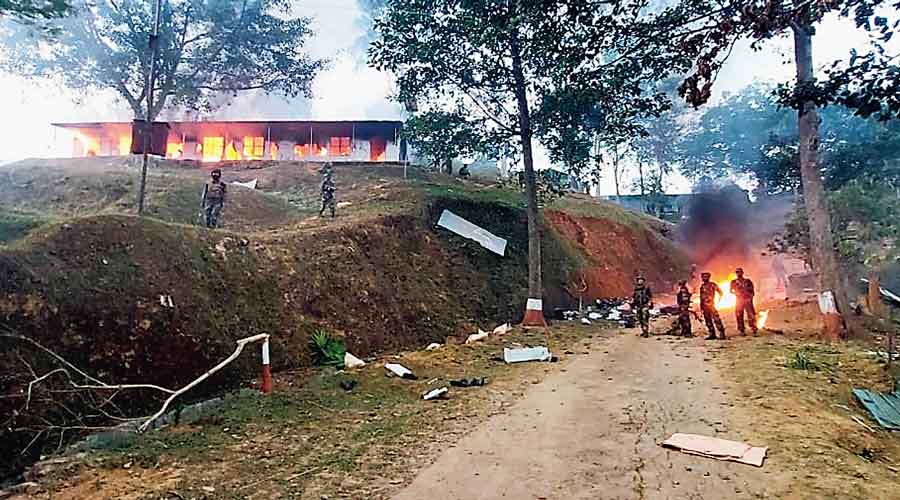 Assam Rifles soldiers stand near their burning camp on Sunday after protesters set it on fire over the civilian killings in Nagaland’s Mon district.
PTI Photo
Umanand Jaiswal   |   Guwahati   |   Published 06.12.21, 01:54 AM

Fourteen civilians and a soldier were killed in Nagaland on Saturday evening in a botched counter-insurgency operation, with the forces firing on a truck carrying coalmine workers mistaking them for militants and later clashing with aggrieved local people who attacked them.

At least 11 villagers and several soldiers were injured in the incident in Mon district, which borders Myanmar. The killings have provoked widespread condemnation and renewed demands for the repeal of the Armed Forces (Special Powers) Act that gives the forces extraordinary powers to search, arrest and shoot.

“A group of protesters entered the Assam Rifles camp in Mon town and started vandalising its offices and buildings late on Sunday afternoon. Assam Rifles personnel resorted to firing to disperse the crowd. Later, one of the protesters was found dead and another critically injured, taking the number of civilians killed since Saturday evening to 14 and the number of injured to 11,” said Abhijit Sinha, Nagaland principal secretary (home).

The situation is “very volatile”, and the district administration has imposed Section 144 in Mon town, prohibiting the gathering of more than five persons and movement of non-essential vehicles. Additional forces have been rushed to Mon to maintain order. Mobile and Internet services, which were shut last night, were restored on Sunday afternoon,” Sinha said.

The army has “deeply regretted” the incident in Mon district and ordered a Court of Inquiry. The state government has formed a five-member special investigation team (SIT), officials said.

The order said the SIT had been asked to “immediately” visit the scene of crime and complete the investigation within a month. The SIT will be under the overall supervision of additional DGP (law and order) Sandeep M. Tamgadge.

Union home minister Amit Shah expressed “anguish” and said the SIT would “thoroughly probe this incident to ensure justice to the bereaved families”.

Sinha, the Nagaland official, had said earlier in the day: “According to available reports, a unit of the army’s para unit from outside the state was conducting the operation.”

Sinha added: “They had inputs about the movement of members of a banned group in the Oting-Tiru area in Tizit subdivision.”

“Unfortunately, the security forces ended up firing on a pickup vehicle carrying villagers working in a coalmine. Six of them died on the spot. After learning of the incident, local villagers confronted the security forces, which resulted in the death of more villagers,” Sinha said.

Agency reports quoting local sources said “hundreds” of villagers had surrounded an Assam Rifles camp after the firing on the truck, burnt vehicles belonging to the paramilitary force, and “clashed with the troopers using crude weapons".

A statement from the Kohima-based defence PRO, Lt Col Sumit Kumar Sharma, said: “The incident and its aftermath is deeply regretted. The cause of the unfortunate loss of lives is being investigated at the highest level and appropriate action will be taken as per the course of law."

It added: “The security forces have suffered severe injuries in the incident, including one soldier who succumbed to his injuries."

Members of the banned NSCN (Khaplang-Yung Aung) faction are reportedly active in the area. The outfit is not part of the peace efforts involving the National Socialist Council of Nagalim (I-M), the seven Naga National Political Groups and the Centre to end the decades-old Naga insurgency.

The NSCN (I-M) condemned the “barbaric” killing of unarmed people by “trigger-happy” personnel.

Congress leader Rahul Gandhi tweeted: “This is heart wrenching. GOI must give a real reply. What exactly is the home ministry doing when neither civilians nor security personnel are safe in our own land?”

The incident has provoked the Eastern Nagaland People’s Organisation (ENPO), the apex body of six Naga tribes seeking a separate state made up of five of Nagaland’s 12 districts, to ask members to “abstain from further participation” in the ongoing Hornbill Festival.

The festival is a much-awaited annual event that showcases the Naga peoples' cultural heritage and attracts tourists from within and outside India.

The ENPO said its move was not against the state government but was meant “to show resentment against the security forces who have committed this heinous crime”, PTI reported.

ENPO general secretary Manlang Phom told this newspaper the slain mine workers were “daily wage earners returning home in a Bolero pickup to spend the Sunday with the families".

The ENPO has called a 12-hour bandh from 6am on Monday in areas falling under its jurisdiction.

The Naga Students’ Federation (NSF) has called a six-hour bandh in Naga-inhabited areas from 6am on Monday, “sternly” asking all paramilitary forces and armed forces “not to make any movements during the duration of the bandh”.

It has also demanded a special Nagaland Assembly session to adopt a resolution for “revocation of the controversial” AFSPA.

The Nationalist Democratic Progressive Party, a BJP ally that heads Nagaland’s Opposition-less government, said: “When the entire state has remained peaceful, with a new hope of a permanent settlement to the Indo-Naga issue in the hearts of the people, it is most unfortunate that the armed forces, whose very duty is to serve and protect, have instead caused terror, pain and anguish to the very people they are to protect and serve.”

It requested the state government to urge the Centre to repeal the AFSPA. Ruling coalition partner Naga People’s Front echoed the demand. The AFSPA was extended in Nagaland for six months from June 30.

Abu Mehta, adviser to the chief minister, said two minutes' silence would be observed and prayers held for those killed in the incident.