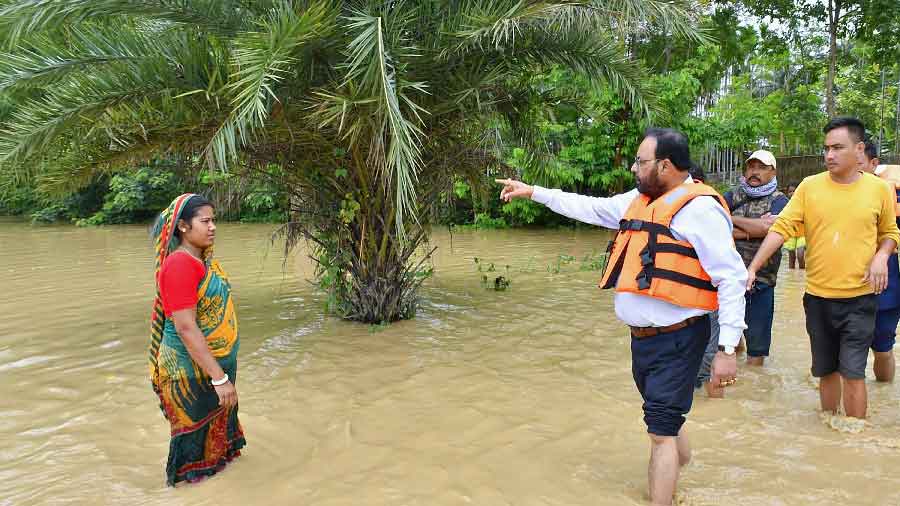 As floodwaters entered fresh areas of Assam, the number of affected people has doubled to over four lakh since the previous day, while three more persons died due to the calamity taking the toll to eight, a government bulletin said on Tuesday.

Landslides wreaked havoc in Arunachal Pradesh and Meghalaya also snapping road connectivity in many areas. An Assam State Disaster Management Authority (ASDMA) bulletin said the number of affected people has reached 4,03,352 across 26 districts from 1,97,248 in 20 districts on Monday.

Cachar is the worst-hit district with 96,697 affected people while 88,420 and 58,975 people are reeling under the deluge respectively.

The death toll has increased to eight, including five killed in landslides.

Union Home Minister Amit Shah has assured Assam of all assistance from the Central government even as the state administration has been pursuing measures to ensure the supply of essential commodities to the affected areas and restore communication channels.

Concerned about the situation in the wake of heavy rainfall in parts of Assam. Spoke to CM Shri @himantabiswa to take stock of the situation. NDRF teams are already been deployed. Assured all possible help from the central government, Shah Tweeted on Tuesday evening.

The Regional Weather Forecasting Centre, Guwahati, has issued a warning for very heavy rainfall in Assam till Wednesday, and widespread rain across the state for the next five days.

Close to 40,000 people have taken shelter in 89 relief camps in different affected areas.

Eleven embankments have been breached since Monday, while another six have been affected, besides damages to houses, roads, bridges and other infrastructure.

Waterlogging was reported from Guwahati and Kharupetia in Darrang district, the ASDMA bulletin said.

Landslides in different locations in Dima Hasao district have disrupted road and rail connectivity to Barak Valley as well as vital parts of Tripura, Mizoram and Manipur since Sunday.

Road communication link to these parts through Meghalaya has also been snapped since Tuesday due to landslides in East Jaintia Hills district of the bordering state.

There has been fresh Landslide in Kuliang village on NH06 this morning. The route from Silchar-Ratachera-Khliehriat has been blocked. Efforts are on to clear the same and necessary assistance is being provided to stranded passengers, East Jaintia Hills district police Tweeted.

Assam Chief Minister Himanta Biswa Sarma said he has taken up the matter of clearing the route with his Meghalaya counterpart.

A Defence release at Guwahati said the Army and Assam Rifles have launched two columns for flood rescue operations in various parts of Cachar on Tuesday after receiving a request for help from the deputy commissioner.

The Air Force has been asked to airdrop most essential supplies to the district from Wednesday, as per an official statement on the decision of a high-level meeting.

The Higher Secondary first year (class 11) examinations in Assam starting from Wednesday have been suspended partially due to floods and extensive damage caused by heavy rains in the last few days.