Several trains were diverted while some were short-terminated 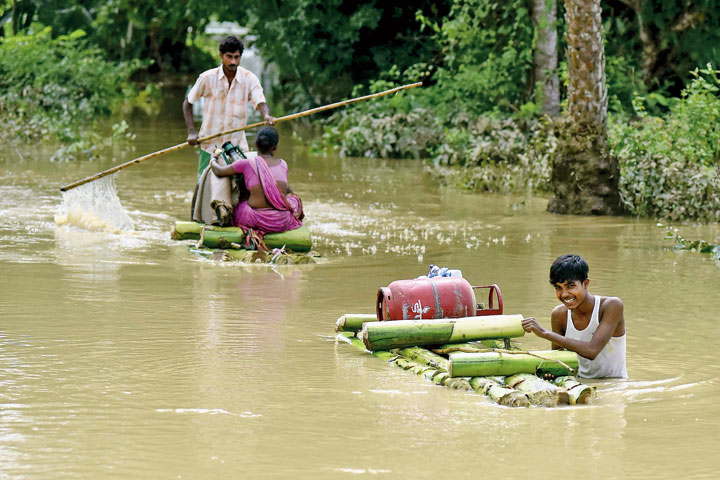 Villagers wade through floodwaters on a rafts as they carry their belongings to a safer place in Nagaon district of Assam on Monday
(PTI)
Mohsin Khaiyam And Sarat Sarma   |   Guwahati/Nagaon   |   Published 28.10.19, 06:39 PM

These are the 12087 Naharlagun-Guwahati Shatabdi Express, 12085 Guwahati-Dibrugarh Shatabdi and the 55901 Lumding-Tinsukia Passenger. These trains will remain cancelled on Tuesday as well.Several trains were diverted while some were short-terminated.The short-terminated trains scheduled for Tuesday include the 15718 Mariani-Guwahati Intercity Express which originates in Dimapur.

The 15909 Down Avadh Assam Express will start from Guwahati on Tuesday, but it will be partially cancelled between Dibrugarh and Guwahati.Senior officials of Lumding division are visiting the sites for restoration work.Railway officials said they were making adequate arrangements to provide basic amenities to passengers of the cancelled or short-terminated trains at all stations.

The foods have also affected normal life in central Assam. Triggered by torrential rain, the floods have brought normal life to a standstill at several places in Nagaon, Hojai and Dima Hasao districts.Damaged roads and landslides at several places rendered the Haflong-Silchar road partially unmotorable since Friday as a bridge collapsed at Harangajao. More than 40 houses were inundated by floodwaters.

Some of the worst-affected areas in Dima Hasao are Maibang, Mahur, Langting, Hatikhali and Harangajao. In Langting village, at least 40 houses are still submerged and the locals are taking shelter in the highlands.The main road connecting Hojai with West Karbi Anglong is still flooded and the locals find it difficult to commute.

The villagers are using boats as the only means of transportation.On Saturday night, the Langri bridge, which connected Umrangsu in Dima Hasao with Lanka in Hojai, and two dumper trucks were washed away.The deluge triggered panic among people of 30 revenue villages of Karbi Anglong and neighbouring Nagaon districts as water levels of the Kopili and the Barapani, two major rivers, were rising in the past two days. Barpathar in Golaghat district has also been affected.

A high-level team of the Nagaon administration, led by deputy commissioner Jadav Saikia, rushed to the border areas under the Kampur revenue circle of the central Assam district to observe the situation which worsened even within the Kampur town committee areas.On Sunday, the link road between Kampur and Jamunamukh was submerged in floodwaters.More than 15 revenue villages of Kampur suffered due to flash flood.Saikia said measures were being taken to provide relief and rehabilitation to the flood victims.

“Last night we provided shelter to people of Volvolia in a local namghar (community prayer hall). We have our arrangements ready if required,” he added.In West Karbi Anglong’s Toradubi and Bokulaguri areas near Boithalangsu the flood situation was grim.

Till now Morigaon is not affected.