'Violent' protests after explosion; fire poses threat to nearby national park and wetland 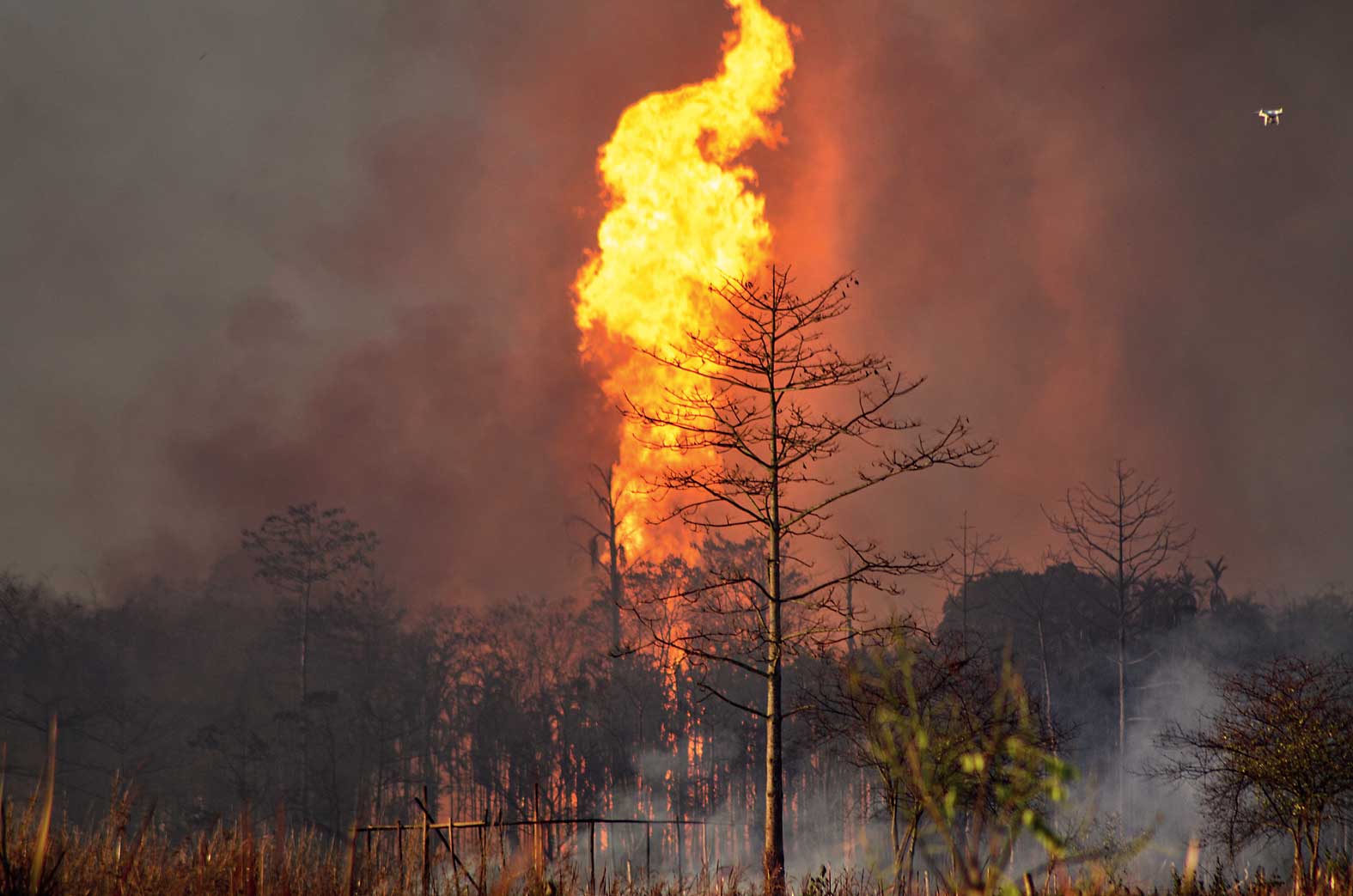 A massive fire broke out at the Baghjan oil well after an explosion on Tuesday afternoon and spread to nearby areas, burning houses and trees and prompting a second round of exodus after the recent blowout-driven evacuation.

Television images showed flames leaping 30-40ft into the sky and ending in a plume of black smoke that people said was visible from Tinsukia town, 15km away.

A fire-fighter from ONGCL suffered “minor injuries” in the blaze, which set off “violent” protests that led to a few Oil India employees being “manhandled” and a few vehicles damaged, an Oil India official said.

A company official said “the army has been deployed to assist the police and maintain order” while the chief minister’s office said the air force was on standby to help fight the fire, if necessary. Some 20 fire tenders were trying to control the fire in the evening.

The 1,610 families evacuated after the May 27 blowout of crude and natural gas and lodged in relief camps 1.5km from the site were hurriedly shifted to new camps 15km away, Baghjan resident Hemanta Moran said, indicating the size of the area endangered by the blaze.

Residents look on as smoke rises from the fire at Baghjan oil field.
(PTI)

Many others from nearby areas were seen leaving on foot and on pickup vans and trucks after the flames began leaping around 1.30pm and damaged “20 to 25” empty houses of the already evacuated families, local people said.

Oil India said the fire broke out during clearing operations in the well, and while plans to control the continuing blowout were being chalked out with a team of three just-arrived experts from Singapore.

It said that following the fire, the entire capping operations would now take four weeks.

The experts from the Singapore-based company, Alert Disaster Control, had arrived in Duliajan, 45km from Baghjan, in the early hours of Monday.

Local people said the fire posed a threat to the Dibru Saikhowa National Park, about 300 metres from the oil well, and the Maguri-Motapung Beel (wetland), 500 metres away.

With local anger, already simmering over the continuing blowout since May 27, threatening to explode after the fire, the CRPF has also been sent in to help maintain order.

Personnel from the NDRF and SDRF are helping with the relief operations at the site, about 530km east of Guwahati.

“Although the fire is still raging, we have managed to contain the spread of the fire to the peripheral areas,” an Oil India official said late in the evening.

He said that because of the fire, the gas and its condensate (chemical spray) would no longer trouble the nearby areas.

A CMO statement said Sonowal had requested Rajnath to “deploy the air force for controlling the fire”, and that Pradhan later told him the air force was on standby.

Oil India said that its officials and those of the ONGC were being evacuated from nearby areas.

“Once the situation is normal, the experts from Alert and the staff of OIL/ONGC will move to the site. Oil and ONGC were to mount a joint operation on Thursday to cap the well,” it said.

“The situation demands (an) arrangement of large quantities of water, installation of high-discharge pumps and removal of debris. All the operations as per Alert will take about four weeks. Efforts will be made to reduce this timeframe as much as possible.”

Nirantar Gohain, a local environment activist, said the ecology would be “under threat” if the well were not capped soon.

Congress MLA Debabrata Saikia, leader of the Opposition in Assam, said the state government should pressure the Centre to “bring in American experts, such as (those from) the company founded by the late (oil well fire-fighter) Red Adair to control the situation, instead of some relatively unknown Singaporean company”.