Trans-boundary collaboration among India, Nepal and Bhutan is intended to secure future of Asian rhino species 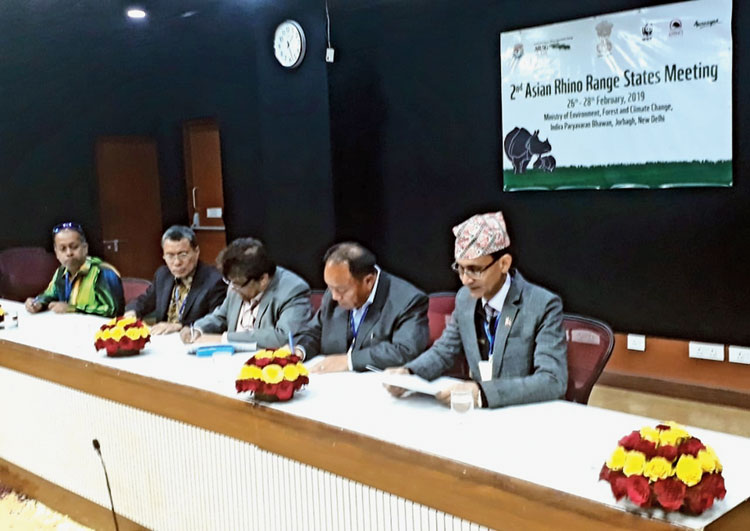 The declaration was signed at the 2nd Asian Rhino Range States meeting in New Delhi, which is being organised by the Union ministry of environment, forests and climate change, and International Union for Conservation of Nature/Species Survival Commission; Asian Rhino Specialist Group along with WWF-India, International Rhino Foundation and Aaranyak, an NGO. Forest ministry officials of the respective countries have signed the declaration.

Rhinos from India, Nepal and Bhutan keep on migrating to its neighbouring countries and experts have observed that instead of managing the two populations differently in different countries, it needs to be managed with the same protocol.

The rhino conservation strategy for India has already called for active engagement between India and Nepal to conserve the greater one-horned rhino.

The five Asian rhino range countries of Bhutan, India, Indonesia, Malaysia and Nepal have also agreed to review the population of three Asian rhino species (greater one-horned, Javan and Sumatra) in every four years to secure its future. It has also agreed to strengthen protection regimes, intelligence gathering and real time sharing of intelligence information on rhino crime and its horn trade to secure the rhino population within and between range countries. There were discussions on rhino trade in Asia in the meeting.

It has said possible opening of international trade of rhino horn and other derivatives will have a detrimental impact on rhino populations in the Asian rhino range countries.

The countries have also decided to initiate research on various habitat parameters, including invasive species threatening the suitable habitats of Asian rhinos and take optimally manage the habitats. It has also decided to explore possibilities of expanding rhino ranges within the country or between rhino range countries for optimal population management.

The meeting also decided to identify connectivity and corridors across international boundaries and keep them functional, safe and secure for free movement of Asian rhinos and other wildlife.

“The second meeting has been successful. WWF India has played a lead role in highlighting the need to work on securing rhino habitats and corridors, conduct of research on rhino health and wildlife forensics. I am glad that these are being recognised by the group as important work and appreciate the work initiated by WWF in India along with the government and other partners,” Amit Sharma, senior co-ordinator Rhino Conservation, WWF India, said.

“This is the time India has got a strategy on rhino conservation and I am positive that this would help in the conservation of the species in the country and also attract more funds from the government and external donors,” he added.