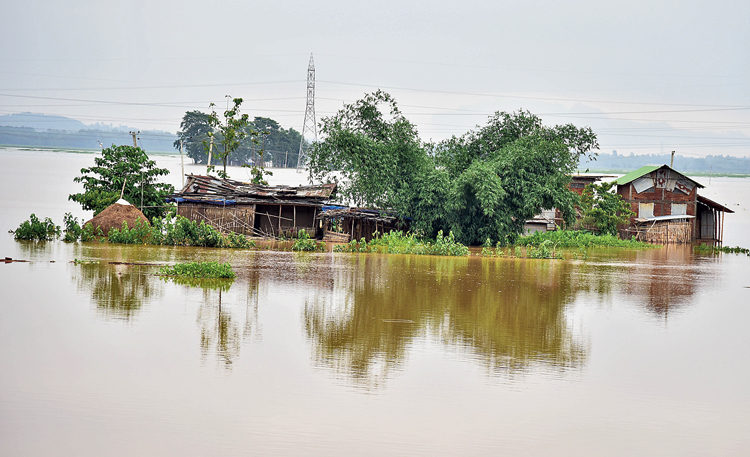 Assam’s Covid count is galloping. On Monday, the pandemic spread its tentacles to all the 33 districts and witnessed the highest one-day spike of 124 cases till now, taking the total number to 514.

As Dispur tried to convey that it has taken the rise in cases, attributed to the return of the stranded, in its stride, health minister Himanta Biswa Sarma said those who want to return should do so by June 10 so that they can concentrate on tackling the floods from July.

Already over 60,000 people have arrived by trains and buses. The first lot of 686 persons arrived by eight flights on Monday.

“Those who want to come should try come within June 10 so that they can be in quarantine. And this chapter (of the stranded) will end, leaving us time to concentrate on tackling floods from July,” he said, a day after he appealed to the stranded to arrive in phases.

The first wave of floods has already hit the state, affecting over 30,000 in four districts.

Sarma’s confidence stems from the fact that those testing positive are from quarantine camps and having travel history. This can be controlled with the existing facilities, doctors said.

On Sunday, he had said that the state has facilities to treat 5,000 patients and will be able to carry 5,000 tests within seven to 10 days. Three private laboratories have also been given the nod to carry out tests.

The day started with Sarma tweeting at 8.50am that the count has increased to 427. It rose to 466 at 1.15pm and to 514 by 5.40pm. The count was 392 on Sunday night. Sarma’s last tweet said the cases were from Karimganj, Lakhimpur, Guwahati, Cachar, Hailakandi, South Salmara, Nalbari, Morigaon and Goalpara.

Assam now has 445 active cases while 62 have recovered and four are dead. The state had recorded its first case on March 31 but cases have been increasing rapidly since May 17, when the 100-mark was breached.

The maximum number of cases (52) on Monday were reported from Upper Assam’s Golaghat district. The in-charge of the office of Golaghat district information and public relations officer, Papu Gogoi, said those found infected had returned home in two batches of 18 and 34 over the past four days from Chennai and Mumbai by trains but since they were all in institutional quarantine, there was no chance of community transmission of the virus.

Dhemaji district, which had remained unaffected, reported four cases, all returnees from Chennai.

The Dhemaji civil hospital, where the four patients have been kept, has been declared a containment zone.

Three persons were found to be positive in South Salmara-Mankachar district of lower Assam. Sources said the trio had returned from Uttar Pradesh on May 22 and were in quarantine since then. The swab samples were collected the same day and they tested positive on May 26.