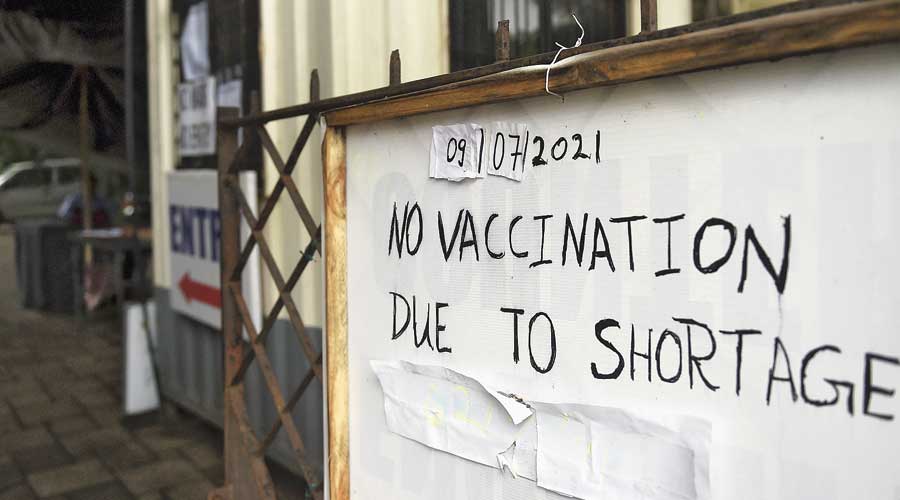 The BJP governments of Assam and Arunachal Pradesh on Tuesday requested the Centre to increase their allotments of vaccines to meet targets, at a meeting where Prime Minister Narendra Modi expressed concern over the pandemic situation in some parts of the Northeast.

The request was made by Assam chief minister Himanta Biswa Sarma and his Arunachal Pradesh counterpart Pema Khandu during a videoconference the Prime Minister held with the chief ministers of the northeastern states on the Covid-19 status of the region.

Sources said Modi observed that the pandemic situation was worrisome in some Northeast districts and urged the chief ministers to stay alert and act fast to check further spread of the virus.

The sources said Sarma and Khandu requested Modi to increase the allotment of vaccines so that the target of inoculating the entire adult population could be achieved at the earliest.

They said there was a huge rush at vaccination centres but the supply was not enough to sustain the momentum.

During a “mega vaccination drive” held last month, Assam had achieved its target of administering three lakh doses a day, but had to “go slow” from the fourth day for want of adequate supply.

Around 83 lakh people have received at least one dose in Assam, including 14 lakh who have got both shots. Assam has a population of about 3.3 crore.

“We are planning to vaccinate people in the nine districts from where we are receiving the most number of cases. For this we need vaccines. It would definitely help if vaccine supply is enhanced,” a source said.

Participating in the virtual meet, Khandu said that while Arunachal had the capacity to vaccinate 15,000 people per day, it was managing to inoculate only 10,000. He also pointed out that there had been zero wastage of doses in his state.

“As we have been optimally utilising our quota of vaccines with zero wastage and our capacity is to vaccinate 5,000 more people per day, our quota may be increased,” Khandu requested new health minister Mandaviya.

Modi said Northeast had equal importance in the Centre’s free vaccination campaign and that “we need to keep accelerating the vaccination process”.

Sources who attended the meeting said the situation in Manipur was worrying. The state reported 890 cases and 15 deaths on Monday, taking the number of infections detected in the past seven days to 5,903 and the casualties to 83. The positivity rate was 13.6 per cent till Monday, much higher than the ideal of below 5 per cent.

This is the second high-level review of the Covid situation in the Northeast since July 7.

The first review was held by the Union home secretary with the chief secretaries, directors-general of police and principal secretaries (health) of the Northeast and the Union Territories where it was noted that of the 73 districts with high case positivity rates of over 10 per cent, 43 were from the Northeast.

Before that the Centre had deputed multi-disciplinary teams to Arunachal Pradesh, Tripura and Manipur, along with Kerala, Chhattisgarh and Odisha, in view of the steep number of Covid cases being reported by them. The teams had helped the states in their efforts towards targeted Covid response and management.

At Tuesday’s meeting, Modi lauded the people, health workers and the governments of the Northeast for their hard work in the fight against the pandemic and creating infrastructure for testing, treatment and vaccination despite the difficult terrain of the region. The Prime Minister, however, expressed concern over the growing number of cases in some districts and stressed the need to catch these signals and take strict actions at the micro level.

Modi re-emphasised the use of micro-containment protocols in dealing with the situation and specifically mentioned such measures undertaken by Assam instead of going for complete lockdown. He urged the chief ministers to make full use of the experience and best practices gathered over the past one-and-a-half years to check the epidemic.

Assam chief minister Sarma said the state had managed to contain the pandemic by declaring more than 6,000 micro-containment zones without going for total lockdown. “Both the economy and the Covid fight were sustained simultaneously,” he said.

Till Monday, Assam had 19,594 active cases and a positivity rate of 1.53 per cent, which Sarma said would be brought below 1 per cent soon.

The Prime Minister also stressed the need for quickly increasing the number of beds, oxygen facilities and paediatric care infrastructure in the Northeast.