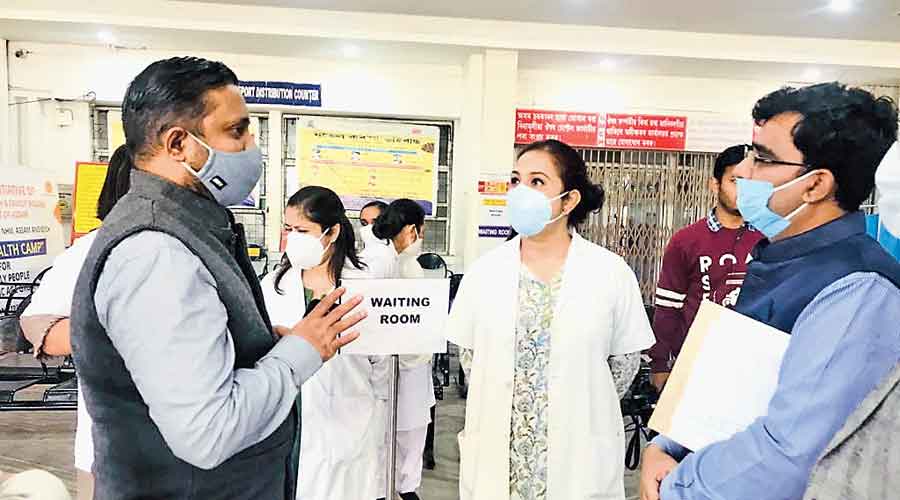 Assam will carry out a dry run for Covid-19 vaccination in the state’s remaining 30 districts from Friday to iron out any apparent loose ends in the delivery system before the actual rollout of the vaccine later this month.

Officials associated with the drive said the dry run was necessary to test the preparedness in all districts so that there are no last-minute hitches during the actual vaccination drive. Assam has recorded over 216,381 Covid-19 cases and 1,057 deaths.

The officials pointed out that the dry run had been conducted successfully in “well-manned, well-equipped and well-managed” centres in Nalbari, Sonitpur and Kamrup (metro) districts.

“Once we go deep, we will learn about the overall preparedness level or the challenges which we may have missed during the dry run so that it could be promptly fixed,” an official said.

He said it should not be seen only as a drive by the health department and that only a collective and synchronised effort will help reach the last man in the line.

Some of the challenges identified during the dry run include Internet connectivity, access to the centre, absenteeism on the assigned day, power back-up and additional temporary infrastructure. Above all, the administration will also have to factor in elections and floods and plan accordingly so there is no drop in momentum once gathered after the launch. Vaccination will be restricted to primary health centres which on an average could serve up to 20,000 people and will be within a 5-km radius.

A moment from the dry run being conducted at Sonapur district hospital
Picture courtesy: NHM

“There are Internet issues in the interior areas. The service providers have to be roped in so that data can be uploaded in real time. Otherwise two-three hours will be lost in moving from one place to another to upload details of patients. Another challenge is the Assembly elections followed by the annual floods. We have to plan for all these things. During the dry run we felt the need for a  bigger observation area because one may have to wait for at least 30 minutes after getting the jab. There may be more people inside than in the waiting area,” an official said.

Another official said these were interesting challenges which could be easily surmounted with collective effort, especially with the support and proactive role of the district administration, transport department, police, panchayats, local volunteers and the media.

“A publicity blitzkrieg too has to be launched so that people adhere to deadlines, feel motivated enough to get to the transport. Schools and colleges too have to be targeted so that students, their parents and neighbours come to the vaccination centre on the assigned day. A huge role will have to be played by the deputy commissioners, considered the eyes and ears of the government. During the vaccination drive, they will also have to serve as the government’s hands and legs,” the official said.

According to officials, it will take almost two months to inoculate nearly 3 lakh Covid warriors, including doctors. Arrangements are likely to be made at 2,000 centres across the state with five persons manning each centre vaccinating 100 people a day.

“We will also have to involve private hospitals and centres in the vaccination drive so that we can complete the process within stipulated deadlines,” another official said.