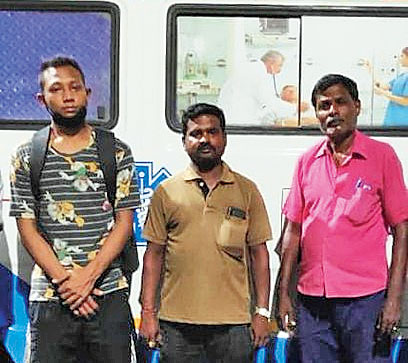 It was an arduous task and a life-risking endeavour for Raphael AVL Malchhanhima to cover over 3,000km to bring his bosom friend’s body from Chennai until the thought of “Tlawmngaina,” a set of Mizo ethical practices, struck him to gather courage for noble deeds.

The thought of his departed friend to be buried in the land where he did not belong to saddened the youth and prodded him to take up the challenge of travelling in ambulance with two drivers for over 3,000km.

The fear of Covid-19 pandemic and contagion could not deter him from the hardship they would face during a three-day journey.

On April 23, Vivian Lalremsanga, 28, a resident of Model Veng in Aizawl, was found dead outside his apartment in Chennai. He friends suspected cardiac arrest. Vivian had completed a hotel management course in a reputed institution in Chennai.

As the institution’s hostel was closed due to the nationwide lockdown, the student joined his friends and was about to shift to a relief camp when he died.

Initially the authorities decided to bury him in Chennai as there were no domestic flights to take the body.

After intervention of the Mizoram government and the Mizo Welfare Association in Chennai, owner of an ambulance agreed to carry the body on condition that a resident of Mizoram should accompany it. Raphael, son of a missionary from remote village Hmawngbu in south Mizoram’s Lawngtlai district, volunteered to bring his friend’s body home.

“The thought of my friend being buried far away from his home broke my heart. My father encouraged me to move ahead,” Raphael told The Telegraph.

He said they began their journey on the midnight of April 25 in the ambulance to traverse more than 3,000km to reach their destination.

“Our journey was not that much smooth due to the nationwide lockdown and we were intercepted at many places,” Raphael added.

He said there were times when they had to travel long hours to get food as all hotels and restaurants along the road were closed and sometimes they were not allowed to dine inside restaurants.

The body of Vivian was brought to Aizawl on Tuesday afternoon and laid to rest.

Raphael and two drivers, Chinnathanbi and Jeyanthiran from Chennai, were accorded a warm welcome upon their arrival. The three were felicitated with Mizo traditional attires and cash as a token of appreciation. The government gave them cash award.

“Thank you from the bottom of our hearts! You’ve just shown what every Mizo heartbeat means when it comes to the term Tlawmngaihna,” Zoramthanga tweeted. Tlawmngaihna means voluntary service.