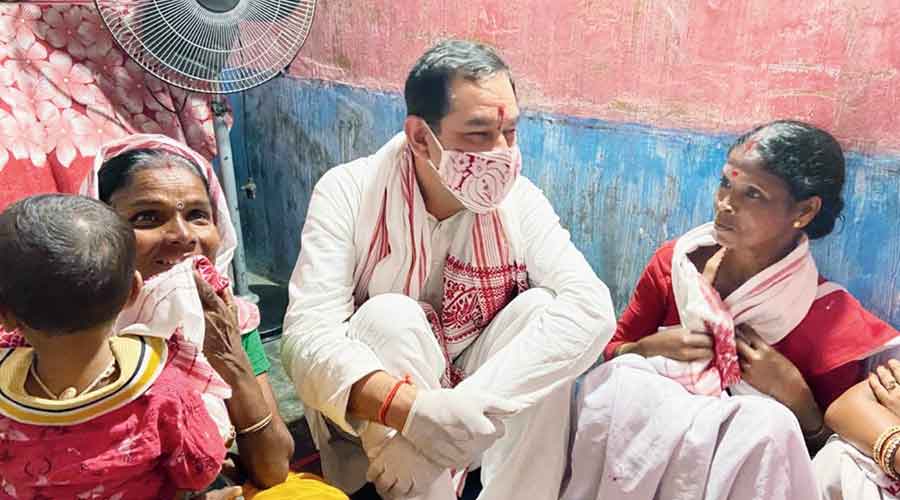 AICC general secretary Jitendra Singh launched his innings as the in-charge of Assam from the state’s tea belt on Sunday, even spending the night at the house of a garden worker in Dibrugarh district.

The move is seen as a fresh push by the Opposition party to win over the electorally decisive tea community before the 2021 Assembly polls.

The community had started drifting towards the BJP since it came to power in 2014. The desertion of the tea community — the Congress’s traditional support — had led to its debacle in the 2016 Assembly and 2019 Lok Sabha polls.

Singh, appointed the Congress in-charge of Assam in September, held back-to-back meetings with its tea cell, Assam Chah Mazdoor Sangha (ACMS) and party leaders of Dibrugarh and Tinsukia districts upon his arrival in Dibrugarh on Sunday afternoon on a seven-day visit.

PCC general secretary Diganta Choudhury and secretary Imdad Hussain told The Telegraph that after meetings with the tea community leaders, Singh suddenly decided to spend the night at the house of a garden worker at Lepetkata tea estate, around 10km from Dibrugarh town, to “understand and feel” their problems.

The tea community vote is decisive in as many as 42 of the state’s 126 Assembly seats.

ACMS general secretary Rupesh Gowala “politely” drove home some bitter truths at the meetings about the community’s grievances and plight, a reason for Singh to spend a night in a tea worker’s quarter.

Minu, in her forties, said they were very happy that two mantris (ministers) spent time with them. Minu, whose family consists of her husband, three daughters and a son, said that life is tough in the garden. Singh was a former Union minister of state in the UPA government, while Bora, a Rajya Sabha MP, was a minister in the earlier Tarun Gogoi government. “They interacted with us till 2am and left around 4am,” Minu said.

The BJP-led state government has also stepped up its effort to keep the tea community on its side, critical to its prospects. It had on Sunday laid the foundation of 119 model schools in gardens.