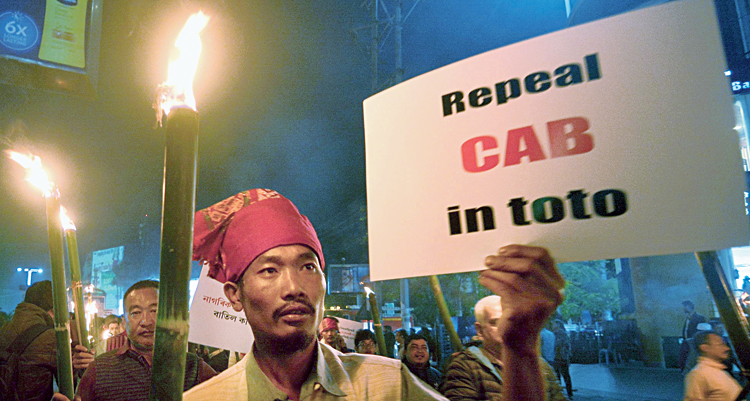 Assam is seemingly moving towards days of non-stop agitation witnessed over three decades ago during the anti-foreigner Assam Movement (1979-1985), as it continues to simmer over the Citizenship (Amendment) Bill.

While the All Assam Students’ Union (AASU), the sentinel of the Movement in the eighties, announced non-stop protests against CAB from Saturday, many others, including civil society groups, have been hitting the streets in protest against the bill.

The bill seeks to grant Indian citizenship to minorities from Bangladesh, Pakistan and Afghanistan who fled religious persecution on or before December 31, 2014, while the Movement culminated in the signing of the Assam Accord, which fixed March 24, 1971, as the cut-off to identify illegal foreigners.

AASU president Dipanka Kumar Nath said on Saturday, “Assam has already taken the burden of lakhs of illegal settlers till 1971. We are not going to take any more. AASU has been opposing CAB since the beginning but the Centre has overlooked our protests. From today, AASU launches non-stop protests.”

AASU members took out torchlit rallies across the state on Saturday and will take out protest marches on Sunday followed by effigy burning on Monday, when the bill is likely to be tabled in the Lok Sabha.

“AASU also extends its support to the 11-hour Northeast bandh called by the North East Students’ Organisation (Neso) on Tuesday. There will be a fast on December 13 in Guwahati and from December 14, there will be non-stop protests and public rallies across the state,” Nath said.

AASU general secretary Lurinjyoti Gogoi said, “The state government has already issued a notice to school authorities to stop students from participating in any protests. Is it not a democratic right of students to join the movement? The government is playing with fire.”

Students across the state have been taking part in anti-CAB rallies.

AASU leaders met Union home minister Amit Shah on Tuesday and conveyed their opposition to the bill. Less than 24 hours of the meeting, the Cabinet cleared the bill.

AASU chief adviser Samujjal Bhattacharjya said, “We challenge Shah to an open debate over CAB. The BJP, in its Vision Document 2016-2025, released before the 2016 Assembly polls, had promised to implement the Accord in its letter and spirit. But it is now betraying the people of Assam by bringing CAB. The BJP has forgotten the sacrifice of 860 martyrs of the Assam Movement, which culminated in the signing of the Accord. The bill will nullify the Accord.”

The state unit of National Students’ Union of India, the student wing of the Congress, burnt copies of the bill here on Saturday. “The leaders and ministers who rose from the Assam Movement have shamelessly forgotten their duties and ignored the people’s future for vote bank,” said Jyoti Bikash Changmai, president of the NSUI unit.

Cotton University students pasted “missing” posters of AGP MP Birendra Prasad Baishya, who has been allegedly maintaining silence over the issue. The posters which have Baishya’s image said, “If anyone has any information about Baishya kindly contact the students of Cotton University.”

AGP spokesperson Dilip Patgiri too faced protests by AASU members who allegedly stuck placards on the windshield of his vehicle slamming party ministers in Sarbananda Sonowal’s cabinet. The placards slammed AGP president Atul Bora of “kneeling down” before the BJP-led the central government.

Similar protests were reported from several other parts of the state too.

The Dibrugarh district administration on Saturday cancelled a concert by Zubeen Garg in the Upper Assam town on Sunday because of security reasons, in view of protests against CAB. Recently, Zubeen wrote an open letter to Assam chief minister Sarbananda Sonowal against the “jati-destroying” bill.