Of the 100 lives lost to date, only eight were Christians 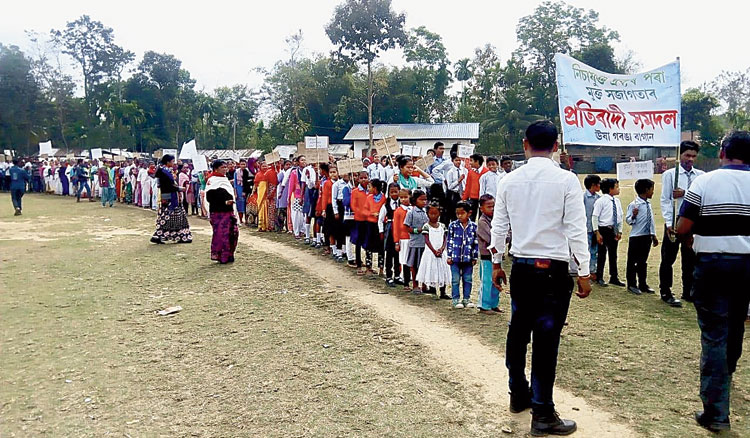 Villagers take out a rally against the hooch tragedy on Thursday
Picture by Umanand Jaiswal
Umanand Jaiswal   |   Published 28.02.19, 07:46 PM

The Church’s sustained engagement with its members before and after the hooch tragedy has resulted in fewer deaths among its members from the tea gardens.

This was stated by government doctors, officials and garden staff working to provide relief to the affected families in Upper Assam.

Three gardens have been significantly affected in the sulai (hooch) tragedy Halmira and Woka tea estates in Golaghat district and Borholla tea estate in Jorhat district, losing 100 workers till date, of whom only eight were Christians.

A break-up of the deceased shows that there was one Christian member among the 46 dead at Halmira, none among the 35 dead at Borholla and seven from the 19 dead at Woka.

Community members said the efforts of the Church leaders to lay stress on leading a healthy life, education and staying away from drugs and alcohol at the Sunday service and at monthly community meetings seem to be bearing fruit.

They said Church had funded in 2003 a short film, Jeevan ke Rang, made by Guwahati-based senior community member Allen Brooks, on education and empowerment of the garden people in Shardi, the language of the Adivasis.

There are nearly 60 households in Halmira, 127 families in Woka, 16km away, and about 10 households in Borholla, about 27km from Halmira. Those in Borholla had embraced Christianity last year, a garden official said.

Mukul Khudi, a retired teacher and community member from Rajabahar, said children aged between three and 12 years are given sermons to stay away from unhealthy lifestyles, among others, every Sunday.

“Then there are prayer services for the seniors where we highlight the pitfalls of drugs and liquor. We also involve our youths to create awareness,” he said.

The liquor tragedy also figured at the gathering associated with centenary of the Maranatha GEL Church in Rajabajar on Wednesday, Khudi said. The engagement is sustained.

Ashok Kullu, welfare officer at Halmira tea estate, said apart from the Sunday service, the Church holds a meeting of male members on the first Sunday of every month. On the second Sunday, it is the turn of the women members.

At Woka, Father Henry Caesar, is “distraught” over the loss of seven lives from the garden.

“We stopped the gambling menace in the area four years back with the support of the administration. If we work together, we can also stop this liquor menace. There is a well-organised racket in the Golaghat-Jorhat area. We need to block the supply,” he said.

The clergyman, who had organised an awareness rally on Monday, had forced 87 people to seek assistance after coming to know of the first death.

“We have called a meeting of youth leaders from all communities to discuss the issue tomorrow,” he said, indicating the engagement against the liquor trade will only intensify in the coming days.