Biplab Kumar Deb resigned as the chief minister of the state, and within a few hours, the party's state legislative unit elected Manik Saha as its new leader 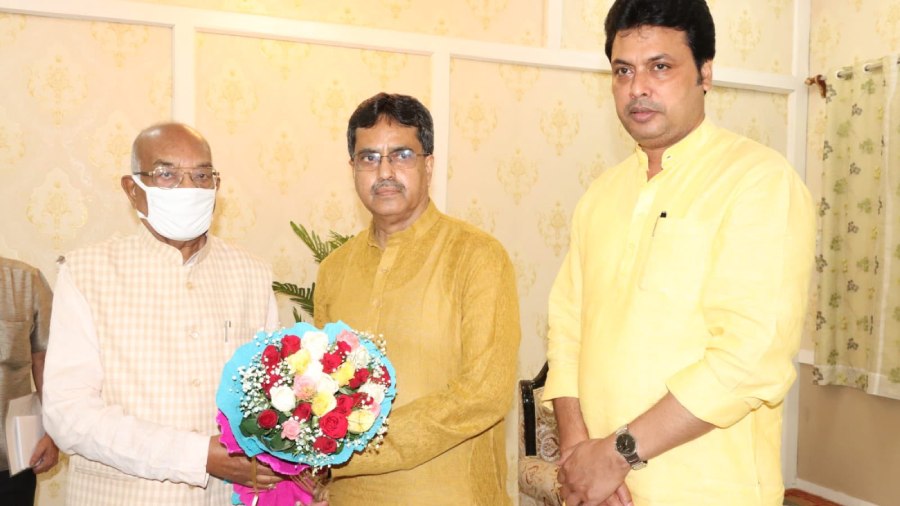 In an apparent effort to ward off anti-incumbency and stem any disgruntlement within its ranks in Tripura, the BJP on Saturday adopted its now successfully tested strategy of going with a new face in the state assembly polls.

Biplab Kumar Deb on Saturday resigned as the chief minister of the Tripura, in a typical BJP style without much foofaraw. And within a few hours, the party's state legislative unit elected Manik Saha as its new leader.

With the gambit of changing the chief minister just before elections working in its favour in Uttarakhand, the BJP's top brass opted for a similar change in Tripura where polls are due early next year.

The BJP has changed five chief ministers since 2019, including in Gujarat and Karnataka.

Saha is also the fourth former Congress leader from the Northeast to become chief minister in the region after joining the BJP, a clear signal that a leader's electoral value is of paramount importance for the party.

Assam's Himanta Biswa Sarma, Pema Khandu in Arunachal Pradesh and N Biren Singh in Manipur are the other chief ministers who were earlier with the Congress.

While the opposition has targeted the BJP for removing its chief ministers, political watchers believe the changes highlight the the party leadership's analysis of the ground feedback and its readiness to address them, even though a final word on the shake-up can only be delivered at the elections.

Broadly three factors worked behind all these changes of chief ministers in the last two-three years. These are - "'delivery on the ground, keeping the organisation in good humour and the leader's popularity", a BJP leader said.

Prime Minister Narendra Modi, who himself was the chief minister of Gujarat from 2001 to 2014, had favoured a long rope to the chief ministers, but after the BJP was defeated in Jharkhand assembly polls with chief minister Raghubar Das losing his seat, the party realised the need for bringing change in leadership.

Within days after the announcement of the results, the BJP brought back its formed leader Babulal Marandi, who had floated his own political outfit, sources said.

The recent spate of changes effected by the party in the central government or in states ruled by it has marked a return to more conventional politics with the standard political fault-lines of caste identity pushing the urge to experiment to the background and the BJP has even preferred those leaders who started their career from other political outfits.

While changing the chief minister in Karnataka, the saffron party replaced Lingayat stalwart B S Yediyurappa as Karnataka CM with another Lingayat leader Basavaraj S Bommai.

In Uttarakhand, it replaced two Thakur chief ministers with another Thakur leader.

However, this was considered more a case of the party rewarding Sarma than it taking any dim view of his predecessor, who was later made a Cabinet minister in the Modi government.

Manik to be new Tripura CM