Bridge turns lifeline for two districts in a year 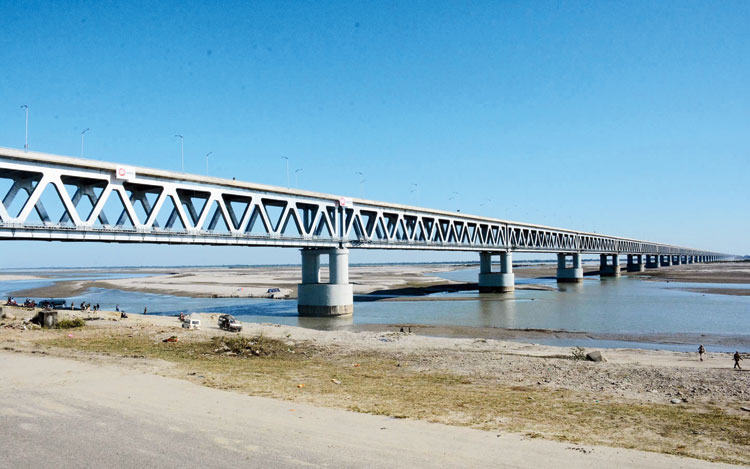 A year has gone by since Prime Minister Narendra Modi inaugurated Bogibeel bridge in Dibrugarh district, the longest-rail-cum road bridge on December 25, it has become the lifeline for the people in the two districts — Dibrugarh and Dhemaji.

Spanning 4.94km, the bridge connecting the North bank of the Brahmaputra to the South bank, has ushered in new economic development for the region, ending a long communication bottleneck.

Earlier, ferry service was the only way to connect the North and the South banks but after the opening of the bridge, communication has become 24x7 and the travelling time, too, has reduced.

“After the opening of the Bogibeel bridge life has become easy because earlier we had to cross the Brahmaputra in a ferry but now we can reach the our destinations within a few hours. The bridge has changed the course of our lives,” said Ranju Pegu, a resident of Dhemaji.

The bridge was set up 32 metres above the bed level of the Brahmaputra.

The double-decker bridge features two railway lines on the lower deck and a three-lane road on the upper deck flanked by footpaths on each side. Bogibeel bridge is India’s first and only fully welded bridge adhering to European codes and welding standards.

After its opening, the bridge became the biggest tourist attraction and it still continues to draw tourists.

“Earlier, we had to face a lot of hurdles if we had any medical emergency but now it has become easy because within two hours we can reach Assam Medical College and Hospital in Dibrugarh. The bridge has ended the long struggle of our people,” said Bimal Sonowal, another resident of Dhemaji.

Not only medical service, the bridge has helped the students who come to Dibrugarh.

“Today, Bogibeel bridge has completed a year and in last one year the living condition of the people has changed because they can easily go to Dibrugarh for leisure or business within a short span of time,” said another resident.

“Everyday I come to Dibrugarh from Dhemaji for coaching classes and return to Dhemaji. If the bridge wasn’t there, it would not have been possible for me to travel and return home in a single day,” said Rintu Gogoi, a student.

Situated 17km downstream of Dibrugarh town, Bogibeel bridge was the fourth bridge over the Brahmaputra connecting Dibrugarh and Dhemaji districts. The foundation stone of the bridge was laid almost 21 years ago by former Prime Minister H.D. Deve Gowda on January 22, 1997.

On April 21, 2002, then Prime Minister Atal Bihari Vajpayee inaugurated the construction of the mega project.