Assailants opened fire at Sukhendu Das and his friend, Rinku Senapati, when they came out from a house after a meeting 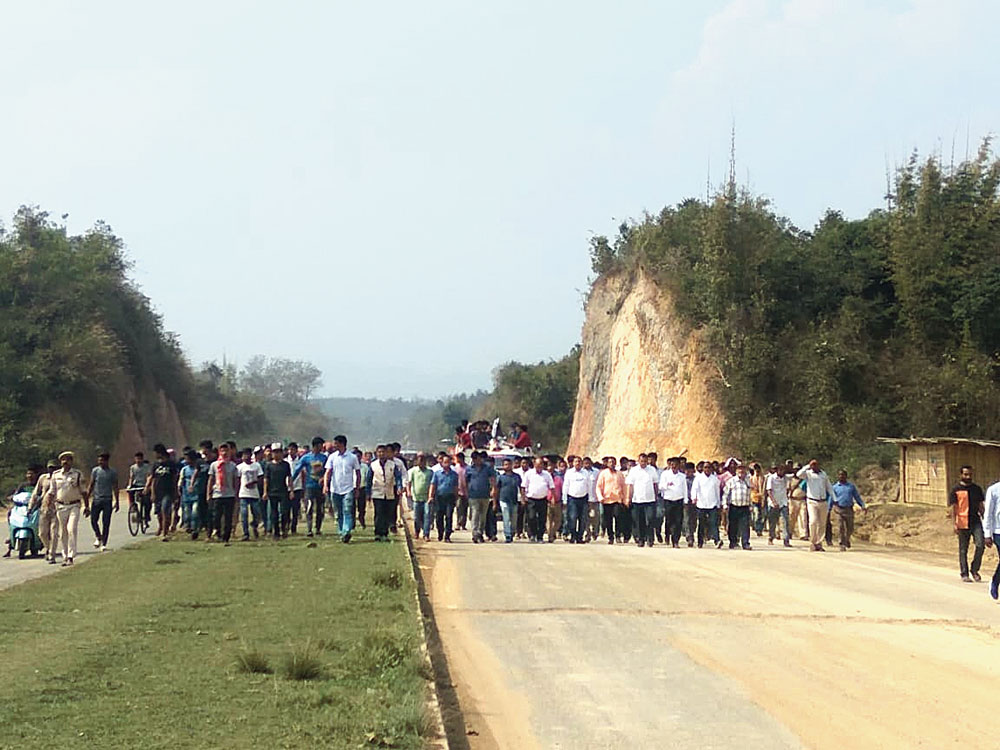 A large number of residents, along with BJP leaders, took out a rally on Wednesday with the body of panchayat president Sukhendu Das, who was killed by unidentified men at Japirbond under Borkhola constituency in Assam’s Cachar district on Tuesday night.

Das, 43, headed the Haticherra gaon panchayat (BJP) and a resident of Leburbond village.

The assailants opened fire at Sukhendu and his friend, Rinku Senapati, 38, when they came out from a house after attending a meeting at Japirbond, around 24km from here, around 8.40pm on Tuesday night. Senapati is also a party worker.

Local residents rushed them to Silchar Medical College and Hospital, where Das succumbed to his injuries around 11.30pm.

On Wednesday morning, a large number of residents, along with many BJP leaders, came out on the streets, after Das’s body was brought to his residence at Leburbond, around 22km from here.

The residents then took his body from his home to a local cremation ground and raised slogans, demanding justice.

Assam chief minister Sarbananda Sonowal has condemned the incident and directed the authorities to take immediate measures to arrest those responsible for the killing.

Kishore Nath demanded the arrest of the assailants within 24 hours.

The local residents also demanded that those involved should be held within 24 hours and threatened to launch large-scale protests if their demand was not fulfilled.

S. Uddin, who lives close to the area where the shooting happened, said he heard a loud sound (like an explosion) around 8.45pm on Tuesday night.

Initially, he thought a tyre had burst. However, when he and some other residents reached the spot, they found Das and his friend lying on the road, bleeding profusely.

Cachar superintendent of police Mugdhajyoti Dev Mahanta told The Telegraph over phone on Wednesday morning that five persons have been picked up in connection with the incident.

The matter is being probed and the arrested persons are being interrogated.

Mahanta, who visited the incident site with a team of officials on Tuesday night, suspected that the motive behind the killing might be a personal grudge. It does not seem to be an attack due to political enmity, he said. Police sources said a five-member special investigation team (SIT) had been formed to investigate the case.

Two bullets were fired at Sukhendu and one at Senapati.

Senapati, who is undergoing treatment at SMCH, is out of danger, sources said.