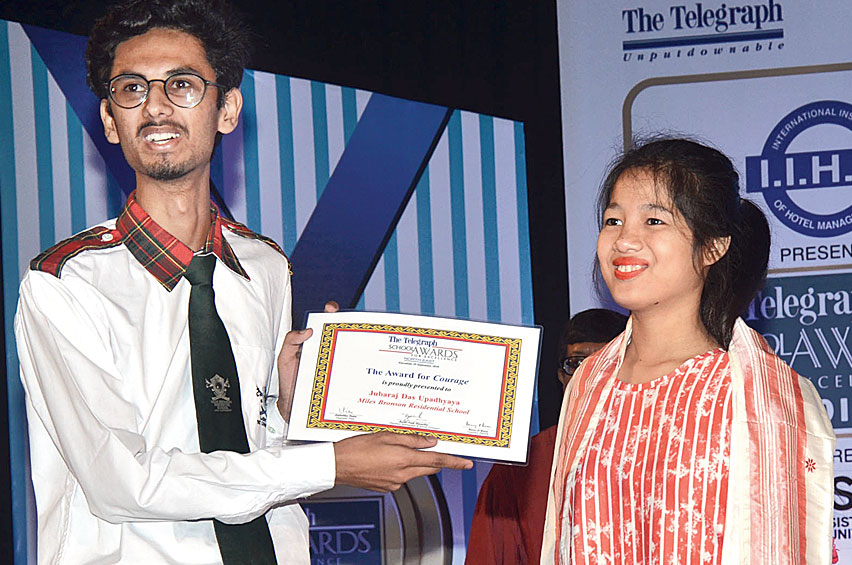 A cruel twist of fate, leading to the death of both his parents, has not bogged down Jubaraj Das Upadhyaya. It has, instead, spurred him on to achieve more.

Jubaraj’s parents died in a road accident while returning to their hometown of Lakhimpur from Guwahati. His father, Toya Nath Upadhyaya Dahal, was driving while his mother, Minati Prabha Das Upadhyaya, was in the front seat when the car met with an accident on February 1 this year.

Jubaraj, winner of The Telegraph Award for Courage at the first edition of the IIHM Presents The Telegraph School Awards for Excellence 2018, powered by Sister Nivedita University, at ITA Pragjyoti Centre for Performing Arts here on Saturday, is a class XII student of Miles Bronson Residential School in Azara. This multi- faceted boy is a keen quizzer, debater, anime, jazz and country music lover. He wants to pursue medicine and set up an organisation for the treatment of the underprivileged and the needy.

The awards, administered by the Telegraph Education Foundation and launched in 1996 in Calcutta, were held for the first time in the Northeast.

Jubaraj is the youngest among three children. His elder sister, Nivedita Upadhyai, a chemical engineering graduate, gave up her job with an MNC after the tragedy. She runs an LPG dealership started by her mother in Lakhimpur and looks after her brothers’ needs. Jubaraj’s elder brother, Partha Pratim Upadhyaya, is studying instrumentation engineering at Jorhat Engineering College.

Nivedita listed reading, writing and doing comedy as Jubaraj’s hobbies. He is also excellent in studies, scoring a cumulative grade point average (CGPA) of 10 in the class X CBSE exams.

“I had mixed emotions while receiving the award. When I saw the problems of the other children, I realised that my problems are comparatively small. Staying in a boarding school has taught me to be independent and take care of my own problems,” Jubaraj said.

“Jubaraj is a very funny and sensible boy. He loves reading, whether it’s fiction or non-fiction. He has a knack of writing as well. His writings have appeared in the school magazine and also in a few local dailies. Jubaraj can be sarcastic at times. He wants to pursue stand-up comedy as a side profession. He loves football and plays basketball,” Nivedita told The Telegraph.

Jubaraj is also known for his love of anime and music. He is a fan of artistes like Frank Sinatra and Johnny Cash among the oldies. Among the new-age musicians, he likes to listen to Keith Urban, Blake Shelton, Anne Marie, Ed Sheeran, Josh Turner and Prateek Kuhad.