Three private madrasas were recently demolished by the administration in Morigaon, Barpeta and Bongaigaon districts following the arrest of its functionaries on terror charges 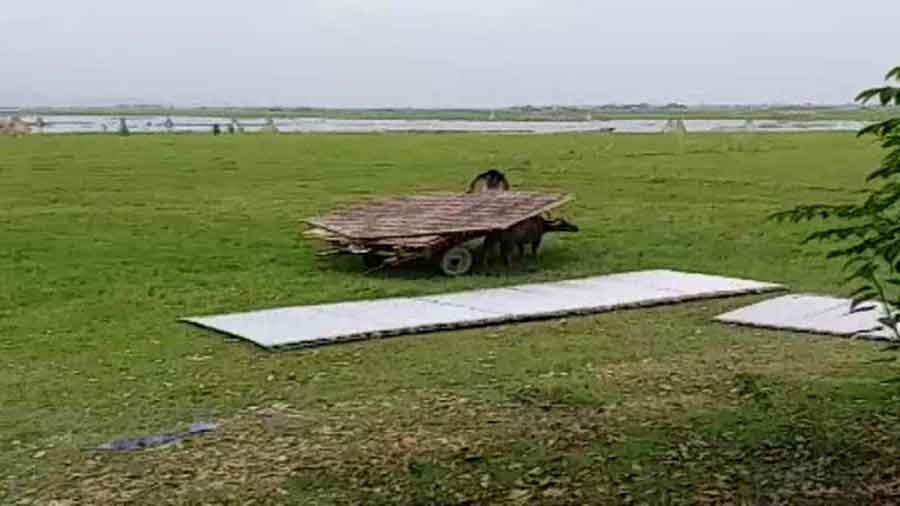 Assam police headquarters issued a statement saying that the residents of Darogar Alga, Pakhiura Char in Goalpara district “voluntarily demolished the madrasa and the residence adjacent to the madrasa which was previously used by 2 suspected Bangladeshi nationals.
Twitter
Umanand Jaiswal   |   Guwahati   |   Published 07.09.22, 02:08 AM

Residents of a riverine village in Assam’s Goalpara district on Tuesday morning “voluntarily” dismantled a madrasa and an adjacent teachers’ quarter to convey a message that they were against terrorist activities, police said.

Two of the madrasa teachers, allegedly linked to terror groups, are now absconding. The imam, who appointed them, was arrested last month for alleged link to terror groups. Assam police headquarters issued a statement saying that the residents of Darogar Alga, Pakhiura Char in Goalpara district “voluntarily demolished the madrasa and the residence adjacent to the madrasa which was previously used by 2 suspected Bangladeshi nationals as a strong resentment towards the Jihadi activities”.

“The arrested accused in the Matia PS case No 105/22, Jalaluddin Sheikh, has engaged Aminul Islam@Usman@Mehdy Hasan and Jahangir Alom, both absconding Bangladeshi AQIS/ABT cadres, as teachers of this Darogar Alga Pakhiura Char Madrasa at different times during 2020-22,” the statement said.

Goalpara police had arrested two imams — Sheikh, 49, and Abdus Subahan, 43 — on August 20. Sheikh was the imam of Tilapara Natun Masjid under Matia police station of Goalpara.  It took a little over an hour and about 30 residents to dismantle both the temporary structures, sources told The Telegraph.

The village has around 100 households. The madrasa was established by Sheikh in 2020 but the madrasa was not functioning for the past few months. Pashan Ali, a resident, said when they came to know that the two teachers were absconding and that they could be involved in terror-related activities, they decided to dismantle the two structures. “They fled putting us in trouble. Our appeal to people is that no teacher should be appointed to madrasas without proper verification,” Ali said.

Another resident, Shah Alom Sheikh, said they would never give shelter to terrorists and would get them arrested if they came to know about their presence.Goalpara district police chief V.V. Rakesh Reddy told The Telegraph that this was the first instance of villagers pulling down a madrasa in the district. “It was a unanimous decision of the villagers. The Bangladeshi nationals working as teachers have been absconding since March,” he said.

Three private madrasas were recently demolished by the administration in Morigaon, Barpeta and Bongaigaon districts following the arrest of its functionaries on terror charges. All government madrasas in Assam were converted to regular schools 2021.

Tuesday’s dismantling of the madrasa came two days after Assam police chief B.J. Mahanta held a “fruitful” meeting with four Muslim organisations to seek their support in putting in place an effective system of monitoring and regularising private madrasas in the state.

Sunday’s meeting was prompted by the arrest of a few madrasa teachers/founders in the state with suspected link with terror groups such as the Ansarullah Bangla Team (ABT) and Al-Qaeda in the Indian Subcontinent (AQIS). Over 40 people have been arrested since March for their alleged link with the two groups.It was conveyed during the meeting that imams  and madrasa teachers planning to work in Assam would have to register themselves on a portal being developed by the government to keep track of those coming from outside the state.