Shakh Farid, 12, the other firing victim, had a wound in his chest, said a resident of Dhalpur 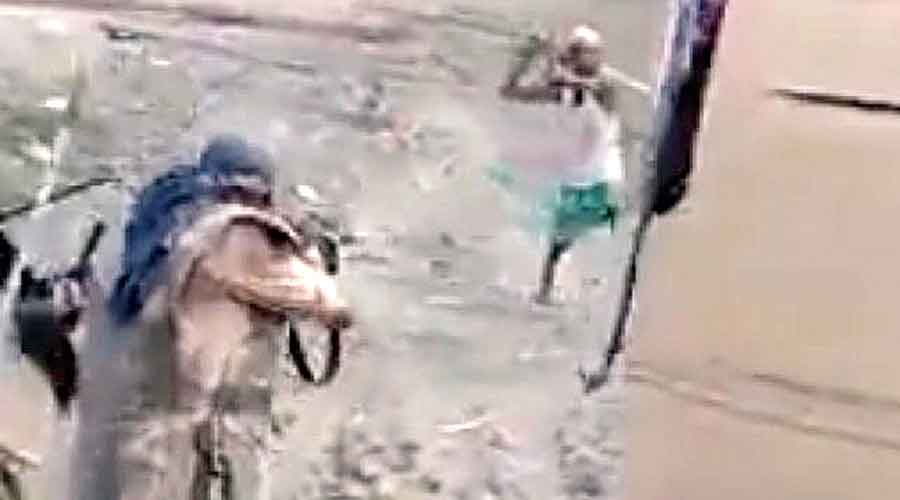 The numbing sight of a photographer stomping on a motionless Maynal Hoque in Assam’s Darrang district on Thursday has overshadowed another feature of the video: the manner in which uniformed men are firing at civilians with the stated objective of restoring public order.

In the video, the content of which has not been disputed yet, Hoque, one of the two victims of the police firing during the eviction drive in a minority-dominated settlement, can be seen in hot pursuit of two policemen and the photographer hired by the district administration to record the displacement operation in Dhalpur.

Wielding a stick, Hoque, 28, is seen hurtling himself towards a posse of Assam police. In the melee, a policeman has a clear shot and he appears to be taking aim at the upper part of Hoque’s body. As several shots can be heard, it is not clear whose bullets hit Hoque. The video later shows a red stain on his chest and a bleeding wound in his left leg close to the ankle.

From the video, it would appear that while some policemen may have aimed at his the leg, someone else shot him in the chest.

Shakh Farid, 12, the other firing victim, had a wound in his chest, said a resident of Dhalpur. Hoque’s first name was initially reported as Moinul but it is spelt Maynal in his Aadhaar card.

The police brutality that follows after Hoque falls to the ground is inexplicable. Just before the photographer indulges in his diabolic act, some of the policemen can be seen surrounding the wounded and fallen Hoque and raining nearly 20 baton blows on him.

One policeman takes deliberate steps towards the motionless Hoque, lifts his baton high above his head and lands a blow with all his might.

The responses do not match the expectations from a uniformed law-enforcement agency if its principal task was to restore order with the minimum use of lethal force. Firing by multiple policemen to incapacitate a single protester armed with a stick appears difficult to justify.

Darrang SP Sushanta Biswa Sarma, younger brother of Assam chief minister and BJP leader Himanta Biswa Sarma, told The Telegraph that the police had displayed maximum restraint after the situation turned volatile. “When they attacked us, we retaliated in self-defence as per protocol. There were around 4,000 people against 300 policemen.”

Imtiaz Hussain, a lawyer, told this newspaper: “Instead of overpowering the man and arresting him as per law, the video clearly shows the bullet was aimed at his chest and then 15-20 policemen beat the wounded man. The beastly acts of the policemen and the photographer reflect the hatred injected deep into the general public by the communal politics of the ruling party in the past six to seven years. The Assam police seem unequipped to deal with such circumstances. They should be properly trained.”

Hussain is the general secretary of the All Assam Minorities Students’ Union, which has been seeking rehabilitation of the eviction-affected people and a probe by a sitting high court judge into the Dhalpur incident. The state government has announced a probe by a retired judge.

The way the police opened fire is drawing comment at a time “encounter” deaths have clocked a spurt in Assam, particularly since the BJP-led government began its second term in May. Around 26 suspected militants or criminals have been killed while trying to escape from police custody. Over 40 have been injured.

Paresh Malakar, educationist and general secretary of the Axom Nagarik Samaj, said the police response in Dhalpur was against all “civilised” notion of policing.

“The group of policemen should have been able to disarm the man in the video and take him into custody. The footage shows the man was actually killed and there was a man jumping on him in front of the police. How can you explain this barbarous act?” Malakar asked.

He added: “Since the authorities have condemned the act of the photographer, it is expected they will also look into the police’s ability to anticipate and react during crises. What happened was against any civilised notion of policing. They cannot be trigger-happy.”

The photographer, identified as Bijay Shankar Baniya, has since been arrested by the CID. He was sent to 14 days’ judicial custody on Friday.

In a memorandum to governor Jagdish Mukhi, Congress state president Bhupen Kumar Borah and CLP leader Debabrata Saikia sought exemplary punishment for the photographer and the police personnel involved in the incident. They urged the chief minister to maintain sanity in the police force.

On September 14, the National Human Rights Commission (NHRC) had directed the Assam DGP to submit an action-taken report within four weeks on a complaint accusing the police of being on an “encounter spree”.

A former DGP said there was no bar on the police resorting to firing but that should be the last option.

“Everything depends on the ground situation and the officers on the ground. First you try to control the situation by using the lathi, tear gas and, if these are not working, and if there is a threat to life and property, you resort to firing. One should not go by the video alone. Wait for the inquiry report,” he said.

Chief minister Sarma said in Guwahati on Saturday that a group of people had collected about Rs 28 lakh from Dhalpur residents in the past few months to stop the eviction but mobilised local residents when they failed to halt the eviction.

He said the government had the names of six people involved in the Dhalpur unrest. He iterated that the entire footage of the Dhalpur incident should be seen before jumping to any conclusion, adding that the police team had been attacked first.

Sarma said there was evidence to suggest the involvement of the Popular Front of India (PFI) in the unrest. He said a PFI team had visited Dhalpur a day before the incident to provide relief to those affected by the eviction.

Assam PFI general secretary Robiul Hussain dismissed the charges and welcomed the probe ordered by the government into the incident. He said the PFI was an NGO that worked for the empowerment of the backward sections of society.