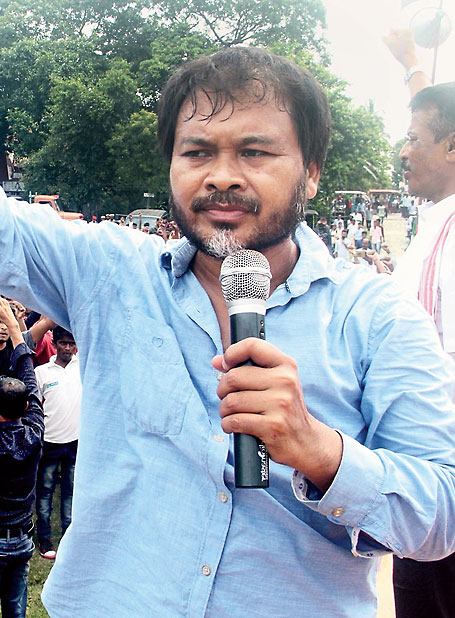 Assam-based peasant rights organisation Krishak Mukti Sangram Samiti (KMSS) on Wednesday accused the National Investigation Agency of trying to establish that its leaders and its role in the anti-Citizenship Amendment Act protests are being guided by Maoist ideology.

KMSS joint general secretary Mukut Deka levelled the allegation against the NIA while pointing out the “loopholes” in the 40-page chargesheet the agency has filed on May 27 at an NIA court against its leaders Akhil Gogoi and Dhaijay Konwar and its student wing leaders Bitu Sonowal and Manash Konwar.

Referring to the chargesheet, which was not made public, Deka said the agency was trying to somehow brand the KMSS and its members as Maoists but the charges had no basis.

“We just have one thing to say: leading a democratic mass movement does not make one a Maoist. Reading books on Maoism does not make one a Maoist. The anti-CAA movement is a people’s movement. People are protesting because they fear about their identity and culture. NIA is saying KMSS leaders have a role in the violence during the anti-CAA protests and that it resembled like a Maoist attack. But we want to say we don’t believe in violence,” Deka said.

He also went on to add that the NIA sleuths had seized about seven-eight books from its office at Chandmari here. “There were also books like The Communist Manifesto and Socialism: A Very Short Introduction. This does not mean we subscribe to Communist ideology. Our student leaders, they say, use words like lal salam and comrades in their Facebook posts. How can use of such words make them Maoists?” Deka asked.

The KMSS leader warned they would launch a statewide mass agitation if Akhil and others are not released at the earliest.

Akhil has been under detention since December 16, 2019, in connection with an NIA case (13/2019) under Sections 120B, 253A, 153B of the IPC and Sections 18 and 39 of the Unlawful Activities (Prevention) Act, 1967. The police arrested Akhil from Jorhat on December 12, when the anti-CAA protests turned violent in Guwahati, leading to widespread damage to public properties. He has not been released since despite acquiring bail because new cases have been slapped against him.

Those protesting against the Act say granting citizenship to persecuted minorities from Bangladesh, Pakistan and Afghanistan who entered India till December 31, 2014, will pose a threat to Assamese identity and culture and that it goes against the 1985 Assam Accord, which had set a cut-off date of March 24, 1971, for detection and deportation of illegal foreigners staying in Assam.

Akhil, who was last week produced at the forensic lab in Kahilipara here for a voice sample test, which will be used as evidence against certain speeches made by him during the anti-CAA protests, made it clear that “no matter what, we will never accept the CAA”.