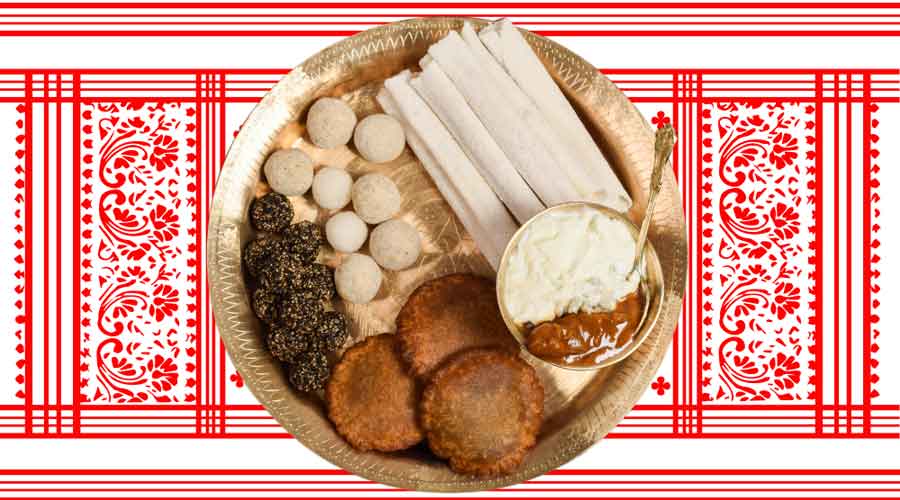 The move will come as a huge relief to those producing and trading gamosas and traditional delicacies because sales have been hit by the restrictions imposed to check the spread of the Covid-19.
Shutterstock
Umanand Jaiswal   |   Guwahati   |   Published 08.07.21, 01:08 AM

The Assam government will be using only hand-woven gamosa and traditional food items during official functions and events from Thursday in an effort to support and promote locally available products.

The decision was taken at the weekly cabinet meeting on Wednesday which also decided to play the state anthem — O Mur Apunar Dex (O my motherland) — at the beginning of all government programmes and the national anthem Jana Gana Mana at the end. The meeting also decided to give a one-year service extension to best-performing non-gazetted employees.

“The move will help our weavers and self-help groups involved in the manufacture of gamosas and traditional delicacies such as laroo and pitha. These will be served in government functions and meetings across the state from tomorrow (Thursday),” cabinet minister Pijush Hazarika said.

The move will come as a huge relief to those producing and trading gamosas and traditional delicacies because sales have been hit by the restrictions imposed to check the spread of the Covid-19.

Gamosa is not only a traditional rectangular cotton cloth with red borders and floral motifs but also a symbol of Assam’s culture and identity. It is used to greet/felicitate/honour guests or invitees or as a towel, decor gift or as part of an attire during religious functions or festivities.

The demand for gamosas is high during Bihu festivities but of late it has also emerged as a symbol of protest especially during the anti-CAA protests.

There are over 4,000 primary weaver cooperative societies in Assam, producing handloom fabrics, including gamosas which earned the geographical indication (GI) tag in 2019. Last year, Assam had tied up with e-commerce firm Flipkart to promote its artefacts and handloom products.

Traditional delicacies such as laroo, pitha, chira and curd are in demand during Bihu but of late these have been available throughout the year, supplied by local self-help groups and sold by grocery shops and restaurants.

“These delicacies have a market. This move of the government will help those involved in producing these delicacies, especially in these Covid times. It is an extension of the central government’s slogan of vocal for local,” a self-help group member said.

The other cabinet decisions included:

⚫ Deshbhakta Tarun Ram Phukan’s death anniversary on July 28 will be observed as Desh Bhakti Divas. Information and public relations department will organise various activities in the districts and sub-divisions to mark the occasion.

⚫ Death anniversary of Lokpriya Gopinath Bordoloi on August 5 will be observed as Karmachari Divas. Five non-gazetted employees at the district level and 10 at the state level will be awarded on Karmachari Divas based on their performances. They will get a year’s service extension.

⚫ TET certificates will have lifetime validity. These candidates will also be allowed to write their TET examination for betterment. Upper age limit will, however, apply during recruitment.