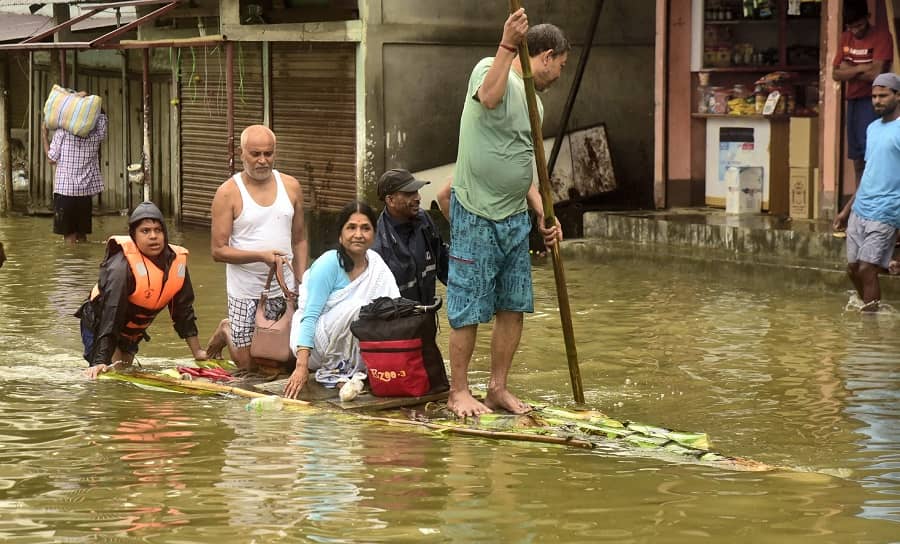 The flood situation in three districts of the Barak Valley - Cachar, Karimganj and Hailakandi remained critical with rising water levels of the Barak and Kushiara rivers inundating vast tracts of land in the valley.
File picture
Our Bureau, PTI   |   Guwahati   |   Published 22.06.22, 05:30 PM

The flood situation in Assam continued to remain grim with rising water levels of the Brahmaputra and Barak rivers inundating fresh areas in the state and impacting over 55 lakh people across 32 districts, officials said on Wednesday.

Eighty-nine people have lost their lives since mid-May due to deluge, they said.

Chief Minister Himanta Biswa Sarma travelled to Nagaon by train to review the situation in flood-hit areas in the district, the officials said, adding that he was also scheduled to visit a few relief camps there.

Nagaon was severely affected by the current wave of floods with over 4,57,381 people coming under the impact of the deluge and 15,188 inmates have taken shelter in 147 relief camps.

"Undertook a train journey from Guwahati to flood-affected areas in Chaparmukh and Kampur. The journey enabled me to take a closer look at the areas ravaged by flood along the railway tracks, which will help us in taking informed decisions and intervene accordingly," Sarma said on Twitter.

As the floodwaters of Kopili have inundated large areas in Nagaon district, necessary steps will be taken to prevent the recurrence of such calamity in the future, he said.

Sarma visited Chaparmukh railway station to interact with flood-affected people taking shelter there and took stock of relief materials provided to them.

"Assuring them all possible help, I asked district administration to ensure adequate relief to the affected people & be on stand-by," he said.

The flood situation in three districts of the Barak Valley - Cachar, Karimganj and Hailakandi remained critical with rising water levels of the Barak and Kushiara rivers inundating vast tracts of land in the valley, the officials said.

The chief minister is scheduled to visit Silchar to review the prevailing flood situation.

Transport Minister Parimal Suklabaidya has been camping at Silchar in Cachar and monitoring the flood situation in the Barak valley with the local MLAs, deputy commissioners and senior officials of the three districts.

Meanwhile, Ambassador of Japan to India Satoshi Suzuki expressed sympathy to the families who lost their "beloved ones and are affected by the recent floods and landslides occurring in Assam and Meghalaya".

"Japan always stands with the people in such difficult times," Satoshi said on Twitter.

The CM thanked him for expressing his concern for the state and people affected by the current wave of floods.

"We sincerely acknowledge the support and cooperation of Japan and its beautiful people towards the development of our state," Sarma said on the microblogging site.

Sarma thanked Union Minister of State for Petroleum and Natural Gas Rameswar Teli and the company's chairman and managing director Sushil Kumar Mishra for the contribution and said this will "significantly aid our ongoing flood-relief work".

Seven more people died due to the floods during the last 24 hours, taking the death toll to 89 and one was reported missing from Kamrup, according to a bulletin of the Assam State Disaster Management Authority.

Among the worst-affected districts are Barpeta with 12,51,359 people reeling under the floodwaters, Dhubri with 5,94,708 and Darrang with 5,47,421, according to the bulletin.

The devastating floods, caused by incessant rainfall, affected 121 revenue circles and 5,577 villages, while 2,62,155 inmates have taken shelter in 862 relief camps, it said.

Relief materials were distributed from 825 delivery points among flood-hit people who have not taken shelters in the relief camps.

According to the bulletin of the Central Water Commission (CWC), the Kopili river was flowing above the danger level at Kampur in Nagaon district, and the Brahmaputra at Nimatighat, Tezpur, Guwahati, Kamrup, Goalpara and Dhubri.

Water levels in several other rivers such as Puthimari, Pagladia, Beki Barak and Kushiara are also above the danger level.

"Seven embankments were breached, while 316 roads and 20 bridges have been damaged," the bulletin said.

At least 26 of the total 233 camps have been inundated by the floodwater in Kaziranga National Park with 11 animals dying due to drowning.

In Pobitora Wildlife Sanctuary, 14 of the total 25 camps have been inundated though there are no reports of animal deaths.