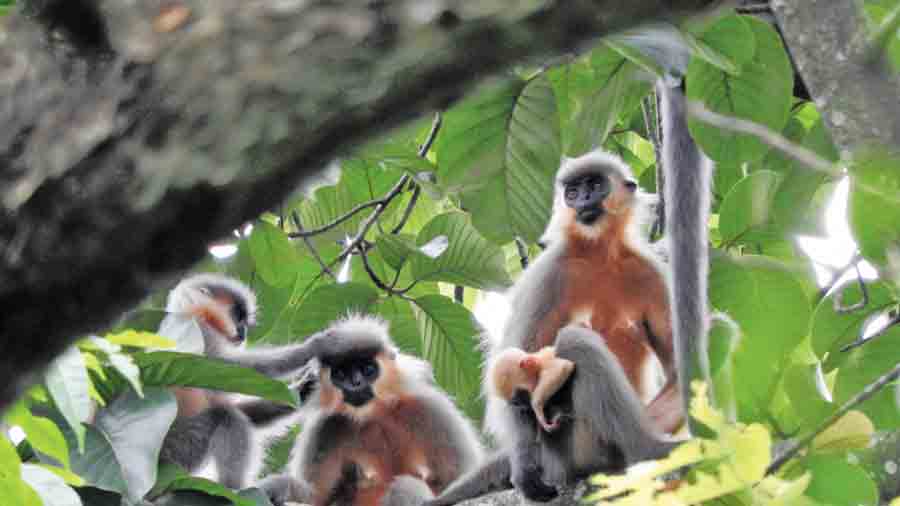 The recovery of five suspected carcasses of the endangered capped langurs from a single spot in Assam’s Behali Reserve Forest has revived demand for upgrading the protected area into a wildlife sanctuary.

Divisional forest officer Arun Vignesh told The Telegraph on Saturday that a probe headed by a range officer has been launched following the recovery of the carcasses from one place on January 3.

“We have also registered a case under relevant sections of the Wildlife Protection Act,1972. Since skulls and bones of the five suspected langurs were recovered from one place we suspect it to be a case of poaching. We are also sending the samples to the Dehradun-based Wildlife Institute of India to confirm the species of the langurs,” Vignesh said.

Located in Biswanath district and spread over 14,000 hectare bordering Arunachal Pradesh, Behali Reserve was declared so in 1917 for its rich biodiversity.

The reserve forest is home to 52 mammals, 300 birds, 23 snakes, 12 amphibians, 11 turtle species, elephants, among others. Four species of primates are also found in the forest, including slow loris, rhesus macaque, capped langur and Assamese macaque.

Dipankar Borah, a former member the Behali-based environment NGO Nature’s Bonyopran said members of the conservation organisation had sighted the capped langurs during one of their trips to the forest in December.

“Fifteen days later they come across seven carcasses of the capped langurs at one spot in the area they were sighted during their earlier trip. It is a case of poaching. They were found without their skin and tails. The estimated population of langurs in 2020 will be around 58. The forest need to be upgraded into a wildlife sanctuary to save this rich forest,” he said.

A 2.51m video was also released by local Behali researchers over the “very depressing” development “shaking” the positive attitude of the locals towards “developing” the reserve forest into a wildlife sanctuary.

They demanded identification and punishment of the culprits as soon as possible; immediate ban on all illegal activities inside the forest; immediate declaration of the reserve forest into a wildlife sanctuary and protection for remaining langurs and other wildlife species.

“This is not the first time wild animals were killed by poachers in the forest. There are earlier records of killing Asiatic elephants and langurs for their meat. Also hunting of birds is very common within the forest,” the video said.
A senior forest official said efforts are on to upgrade the forest into a wildlife sanctuary.

“Presently, the Behali forest is under the Assam Forest Regulation Act. Once it is declared a wildlife sanctuary it will come under the Wildlife Protection Act, more stringent laws will kick in, making it even difficult to even take out a leaf out of the forest,” he said.

A source familiar with the forest area said part of the forest is disputed, claimed by both Assam and Arunachal Pradesh. “So it won’t be an easy task. Both states will need to come together for the upgrade,” he said.